Working in Leeds has its advantages like being close to so many different restaurants, (like my recent review) and of course bars! It can also have its disadvantages (hangovers and bank balance)! One restaurant that has been on my radar for a while is Smoke Barbecue, having walked past it most days when going to work. As the name might suggest its a barbecue restaurant, which there seems to be a lot around at the moment. 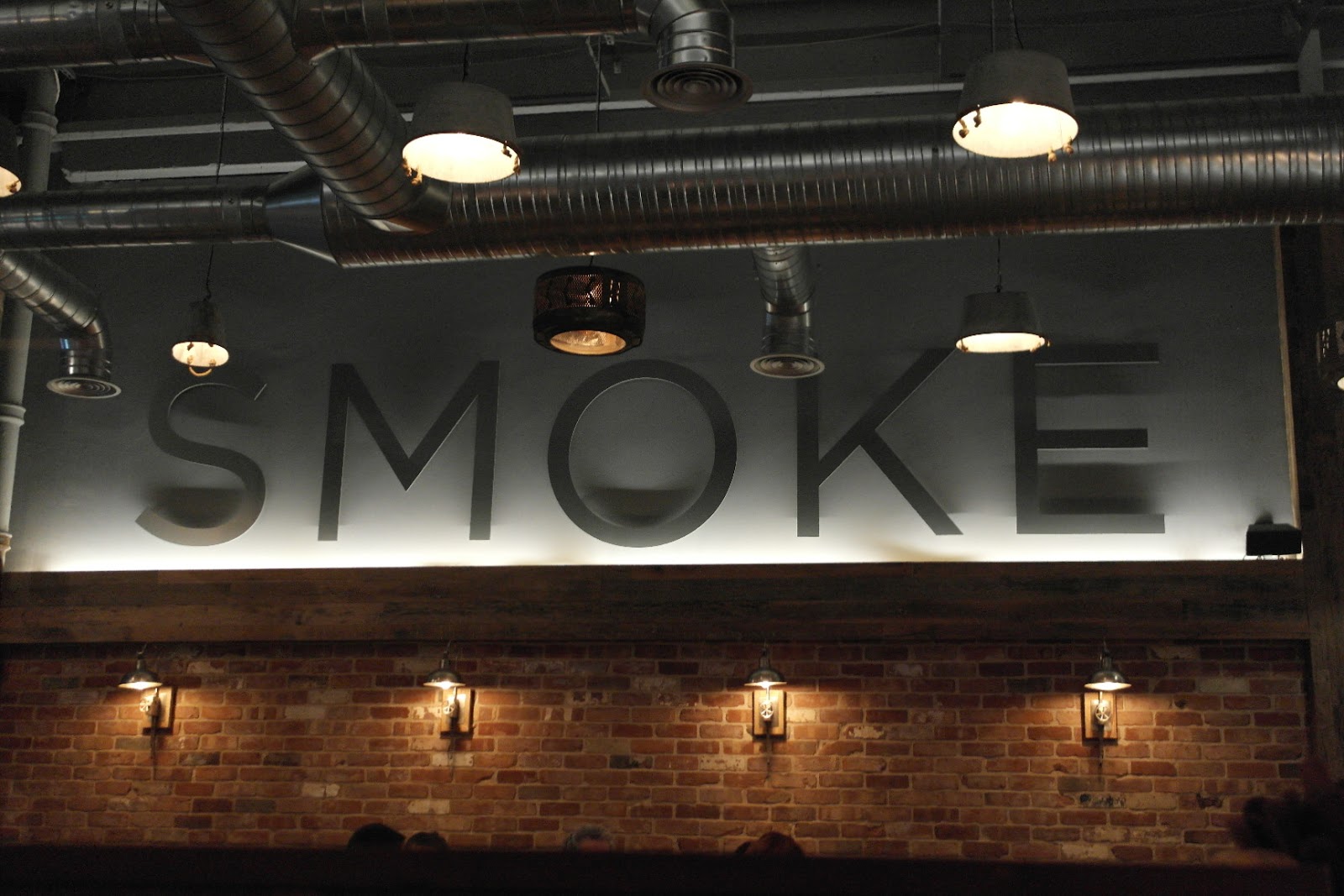 Last Sunday, Sam and I were in Leeds to pick up some Christmas shopping and afterwards decided to make a long awaited visit for a late lunch. It was a place I’d been wanting to visit for a while, I’d heard mix reviews about it so was a little unsure what to expect. 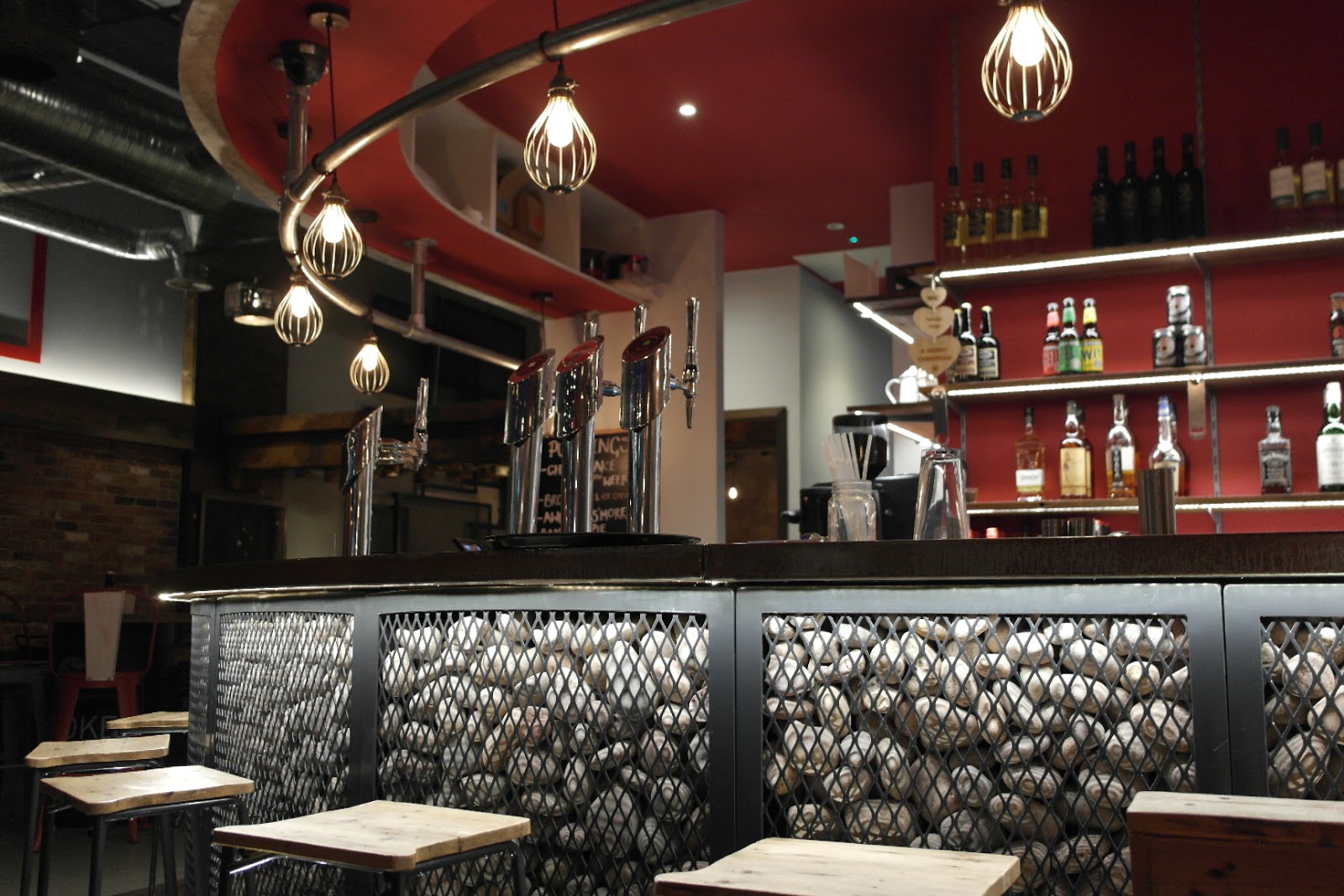 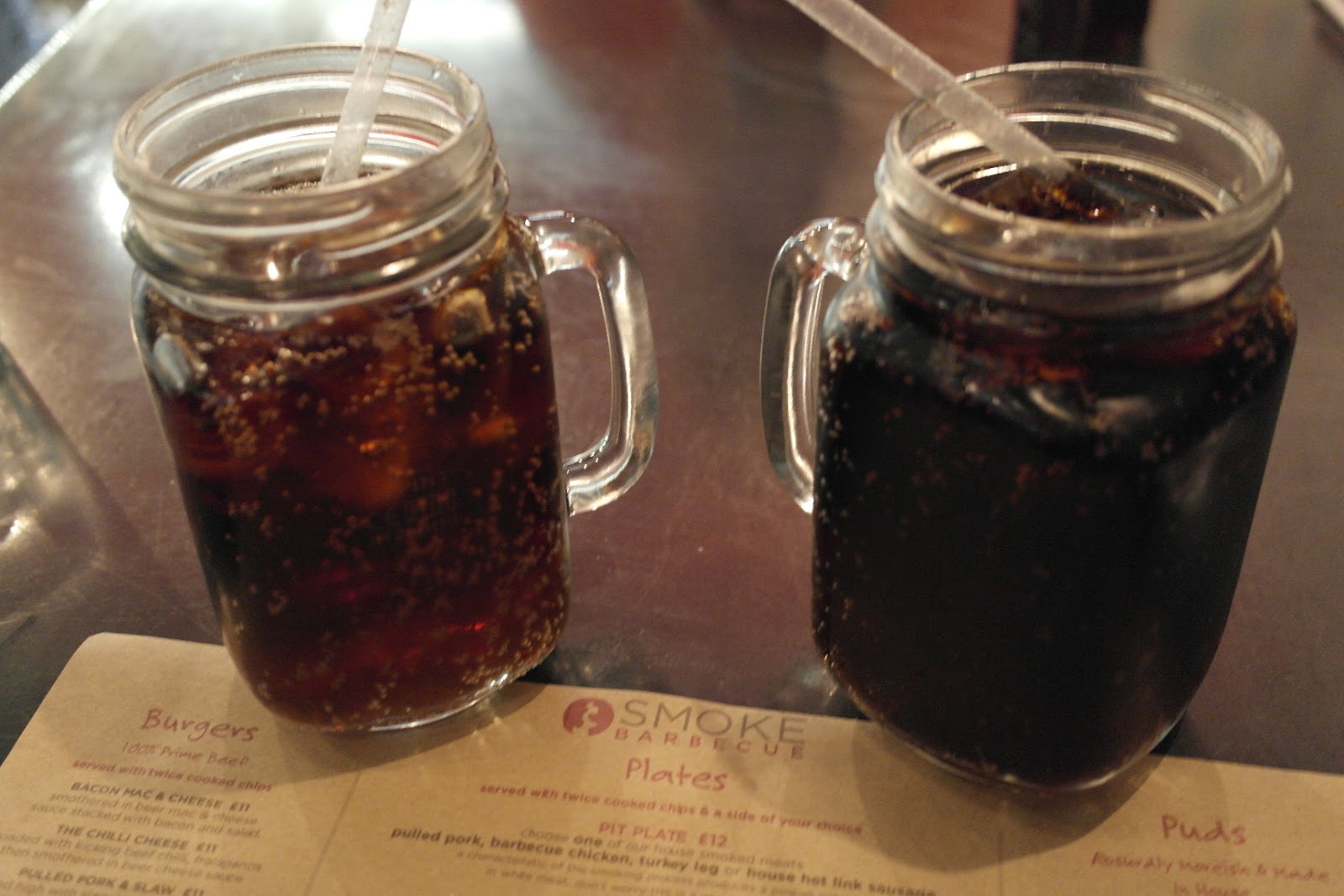 When we arrived, it was fairly quiet, there were only a handful of other diners in. We were seated near to the bar in one of the booths which resembled wooden pallets! As with the furnishings, the decor is quite minimal throughout, but does have some nice atmospheric lighting. We started with soft drinks, diet coke and cherry served in mason jars (£2.50 each) and snacked on the barbecue popcorn we were brought. Although I immediately wished I’d gone for one of their delicious sounding milkshakes! 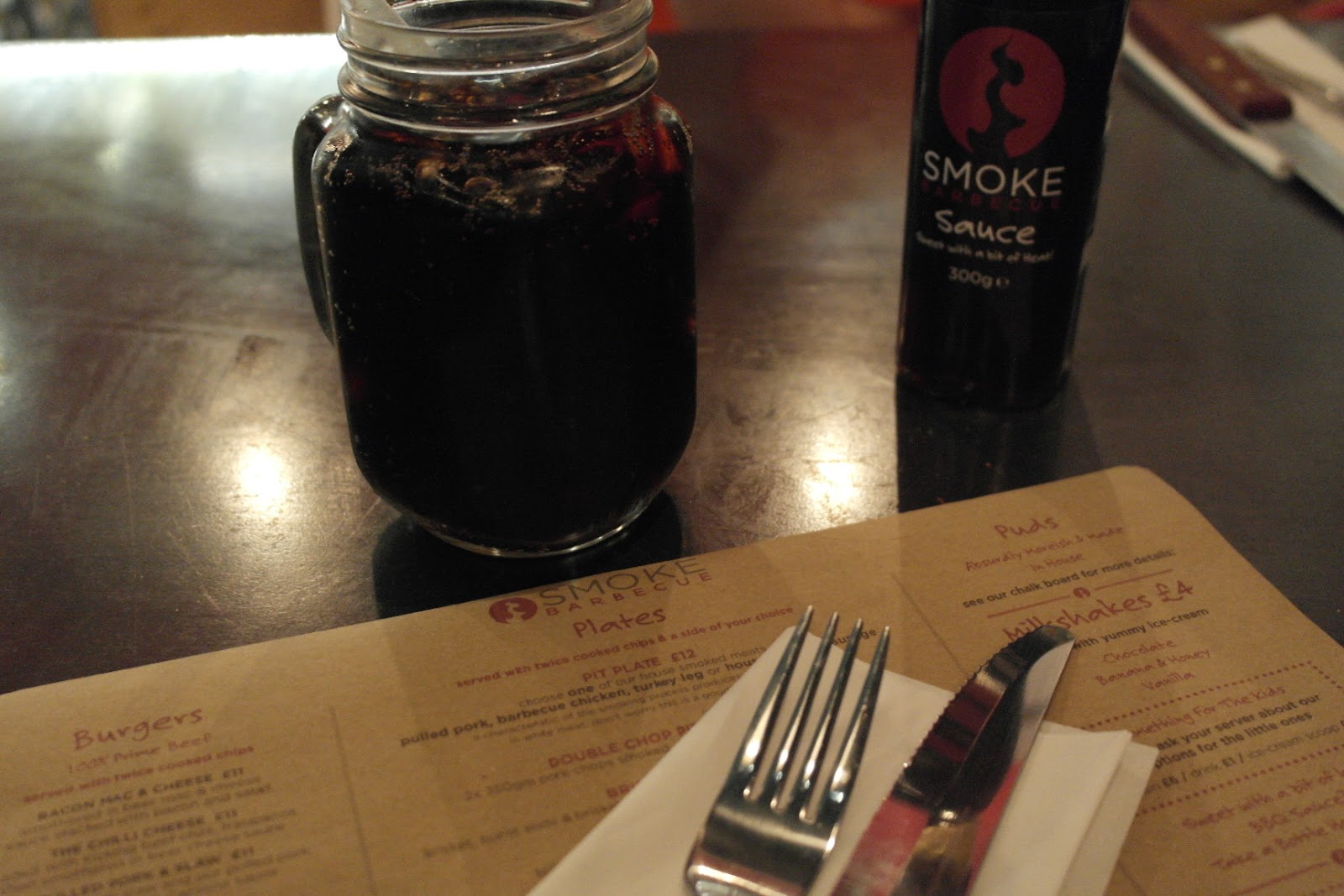 It’s not a restaurant that really does starters, so we were straight in to the mains. Sam chose the bacon mac and cheese burger, £11 with beer mac and cheese sauce and bacon and salad. I’d usually go for Pulled pork from that other well known barbecue place in Leeds, but fancied trying something different. So I went for the Pit plate with house hot link sausage, £12 served with twice cooked chips and a choice of side, I chose crisp onion strings. 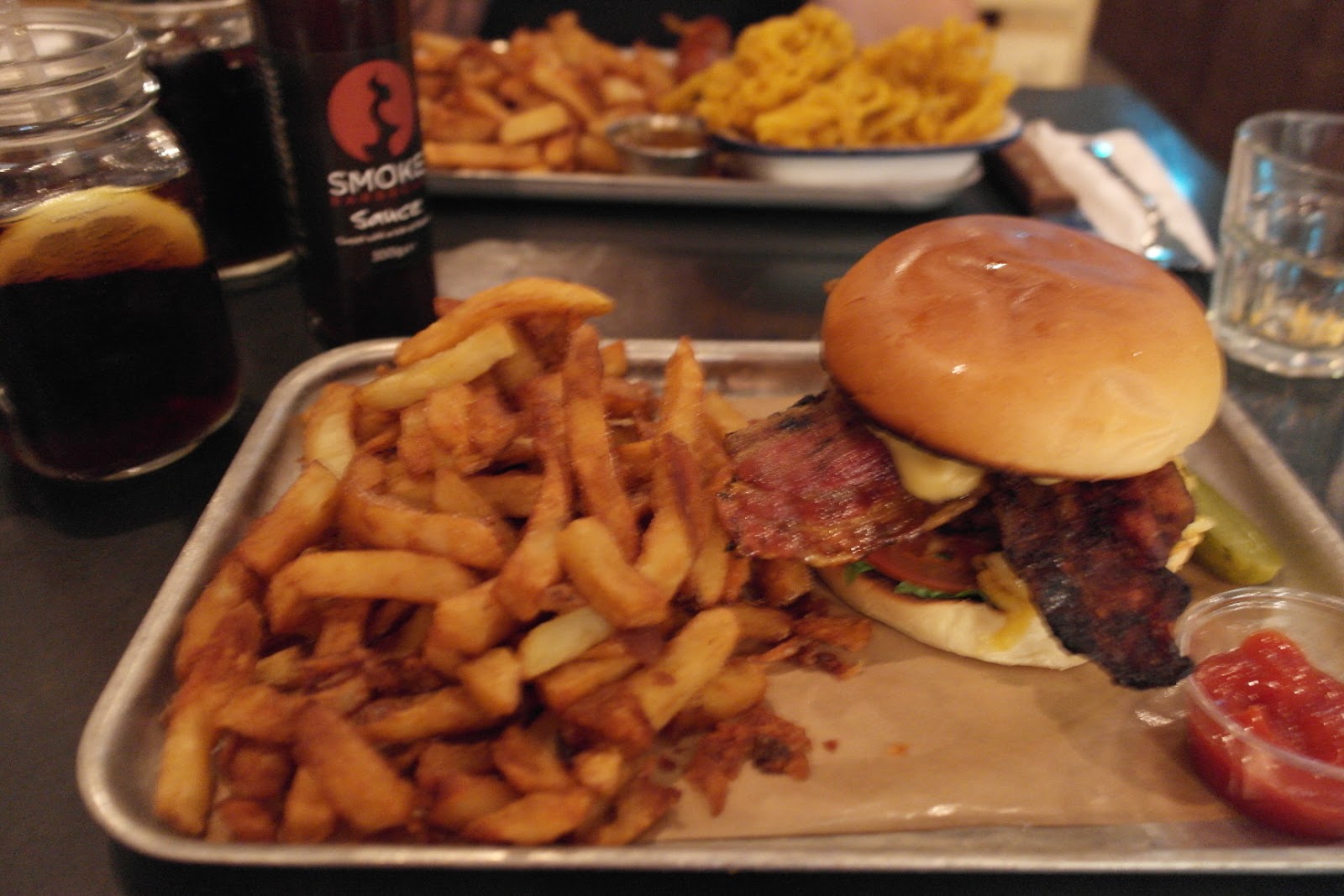 First impressions, well just like at that mountain like portion of chips! It was a bit of a challenge for Sam, I did try and help out by eating some of her chips though! Sam did comment that the bacon was overcooked and that the macaroni cheese wasn’t actually made with macaroni, but normal pasta shapes. I did try the burger for review purposes and it did have a really nice smoky, barbecue taste to it. 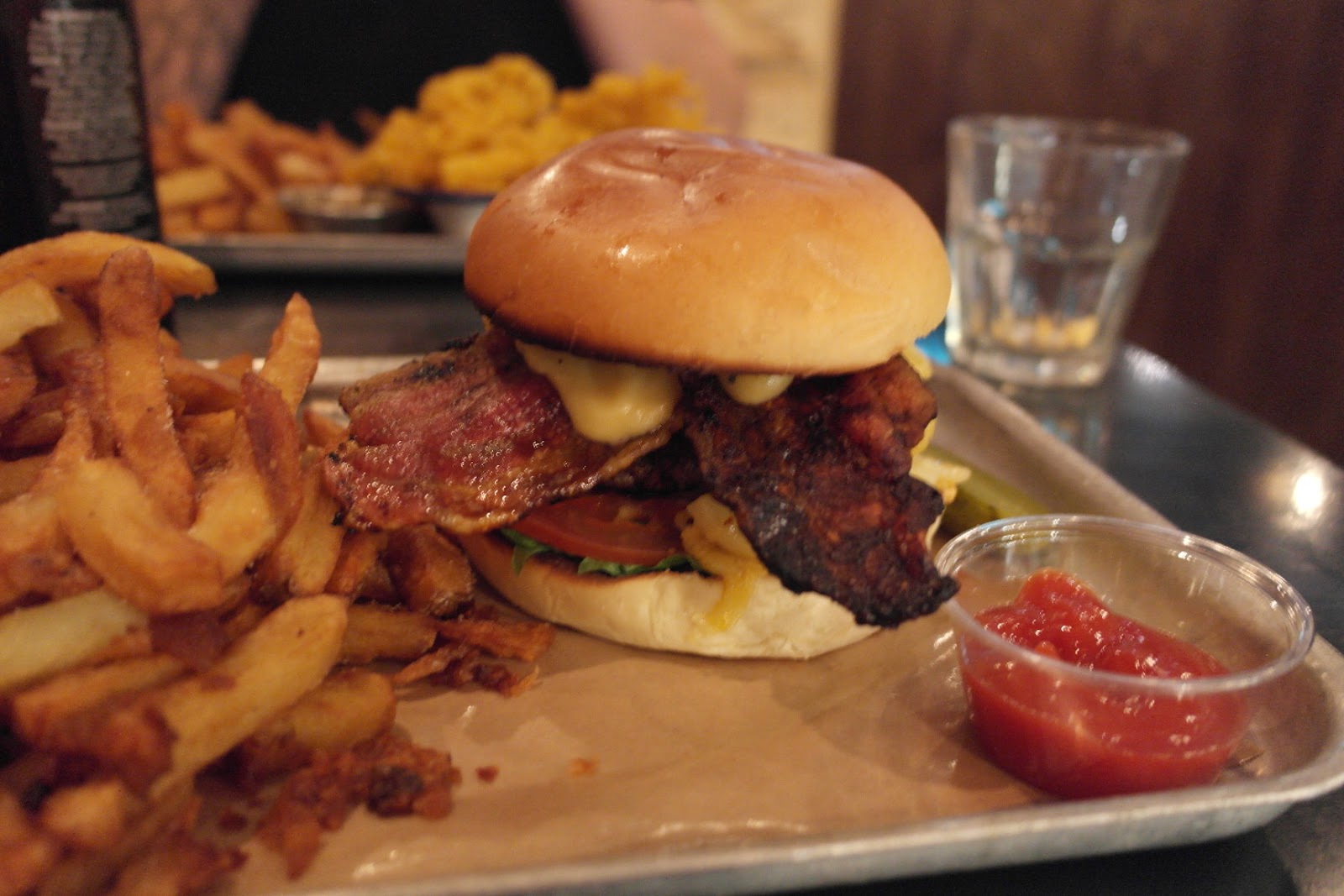 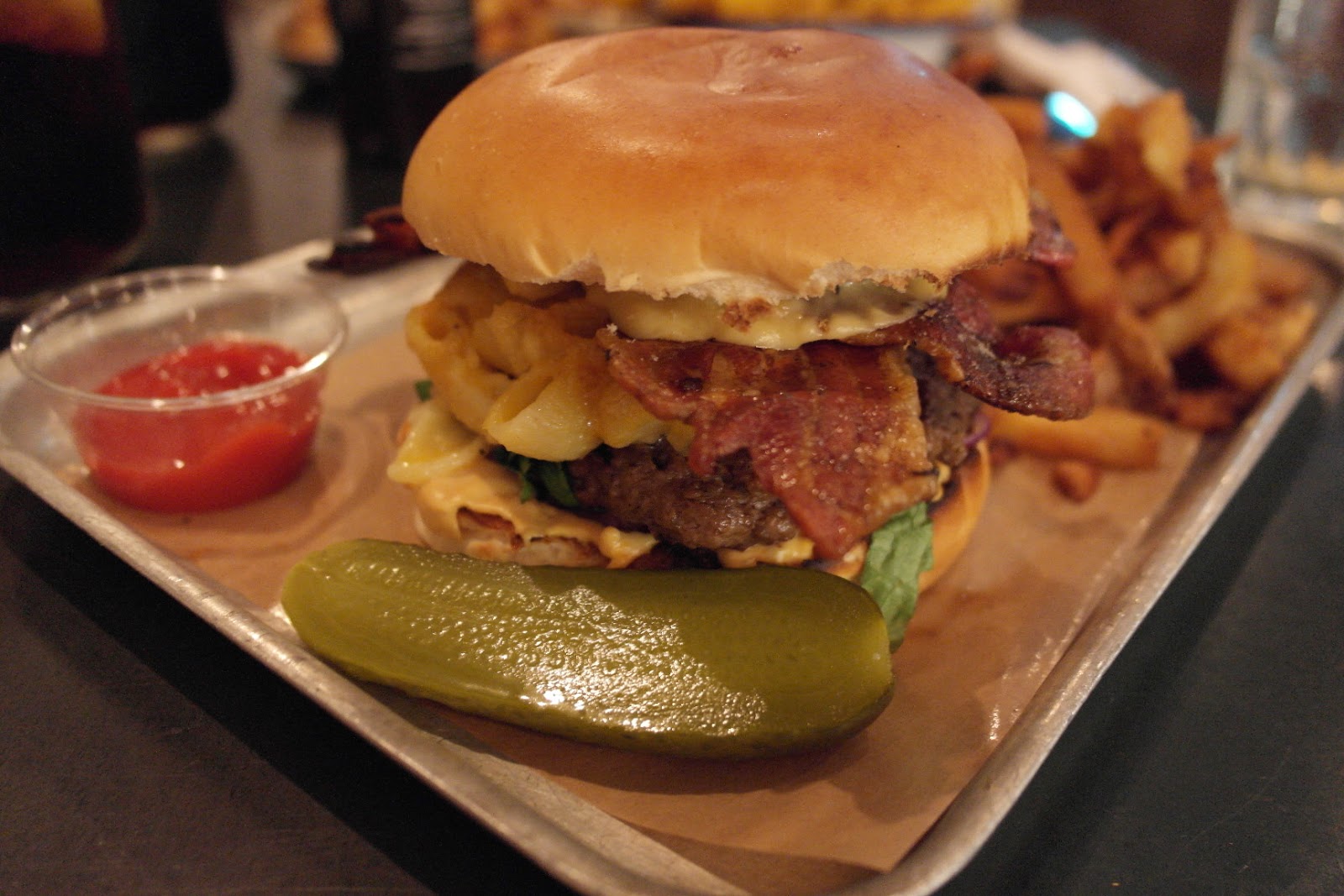 My house hot link sausage dish was a similar enormous size as Sam’s burger! Sometimes I do like a nice sized portion but even these were way too much for me. The twice cooked were delicious, possibly the best I’ve tried for a while. I was a little bit disappointed with the hot link sausage, I was expecting something a bit more than a bratwurst hot dog sausage. I didn’t think there was much taste or flavour to it. 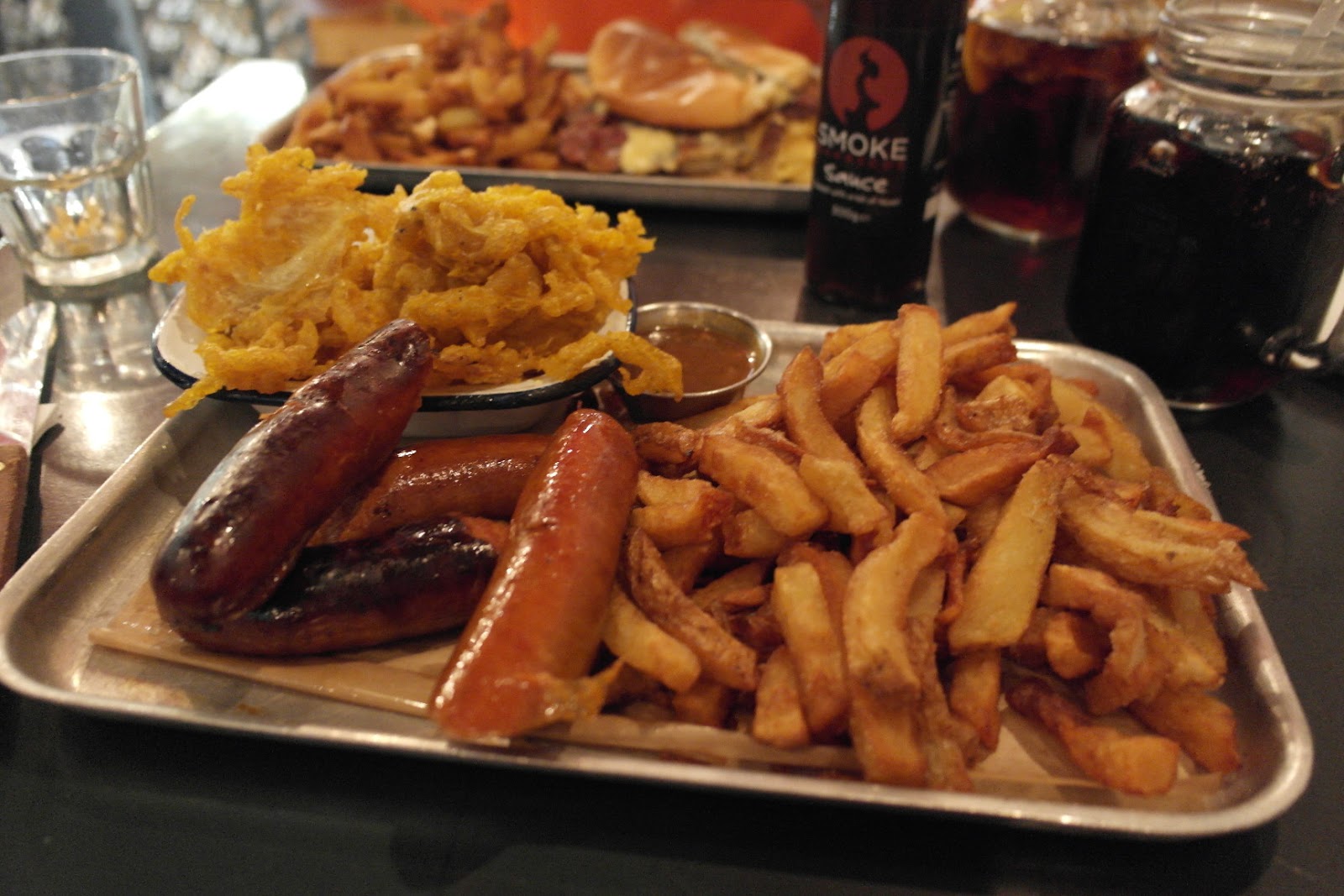 I’d tried to eat that much that the crisp onion strings nearly went untouched! They were like their own take on onion rings. For me, were a bit greasy and just too much with everything on the plate. 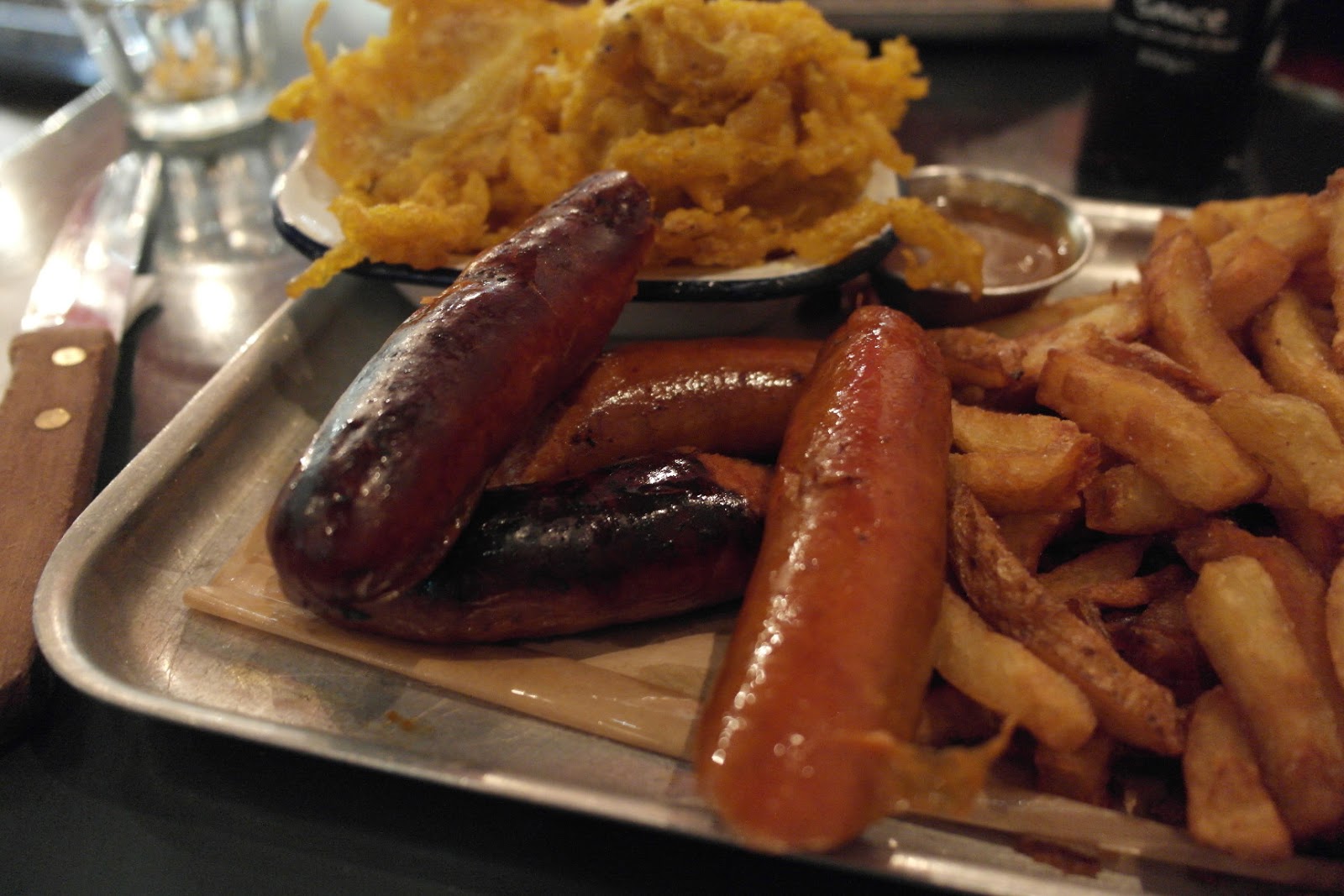 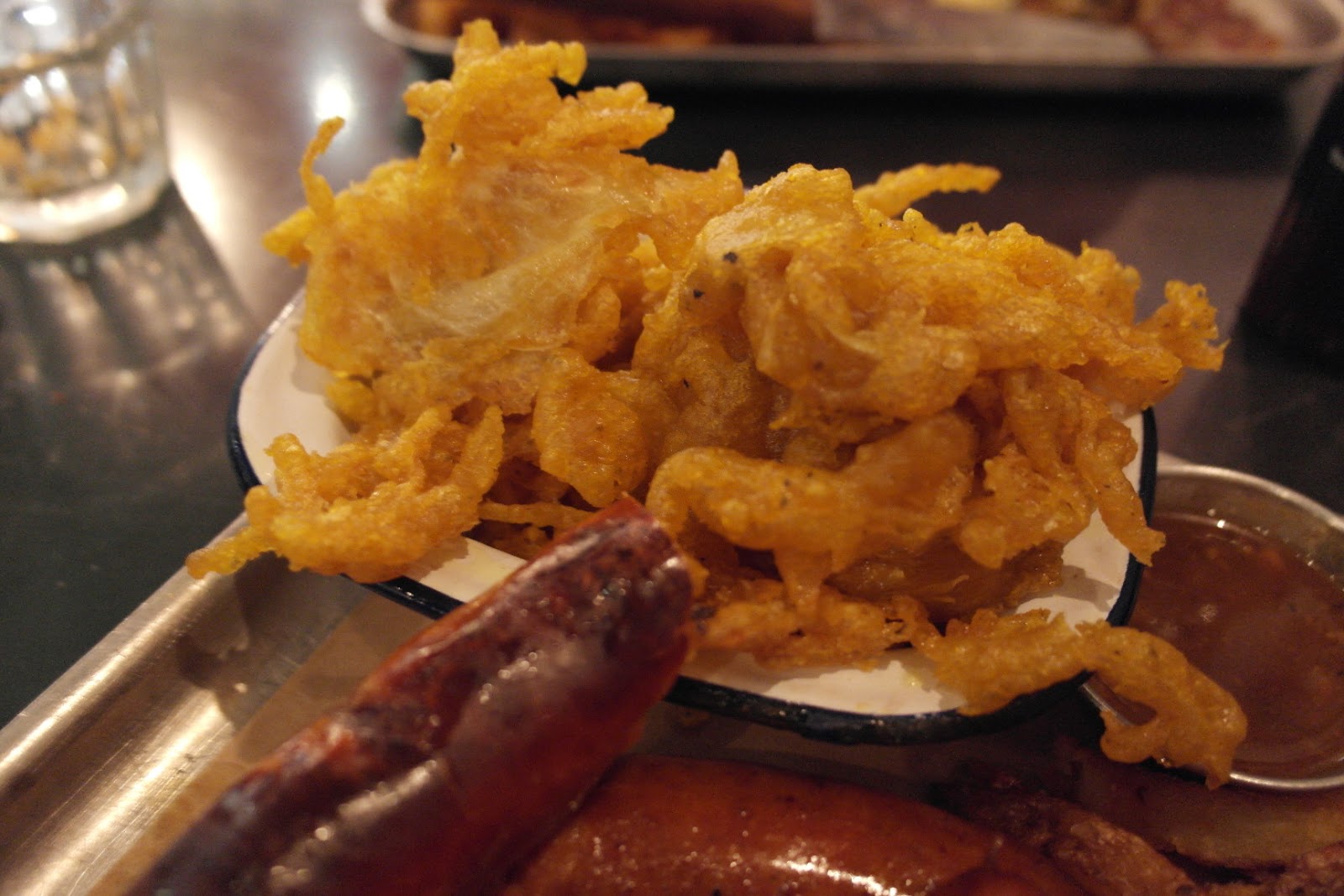 For me, their menu is a bit limited, there are other similar restaurants in the city offer a more varied menu that include starter or smaller dishes. If your looking for a bit of a food challenge, a visit to Smoke Barbecue could be right up your street! It might not be for you if you like a smaller or average size plate, believe me the portion sizes are humongous! I’d say its quite reasonably priced for main dishes and similar to what you pay in other similar restaurants. But the quality of food was sadly, a bit of a let down for me.

Have you been to Smoke Barbecue? What did you think of it? Let me know by commenting below.