You may of noticed from my recent posts, I love dining out, especially on a weekend! Did you catch my latest Sunday lunch review? We were looking for somewhere to eat one Sunday evening, a couple of weeks ago and came across Book a Table Star Deals. There were a few possibilities, however, the French restaurant, Hotel Du Vin had been on my radar for a while. 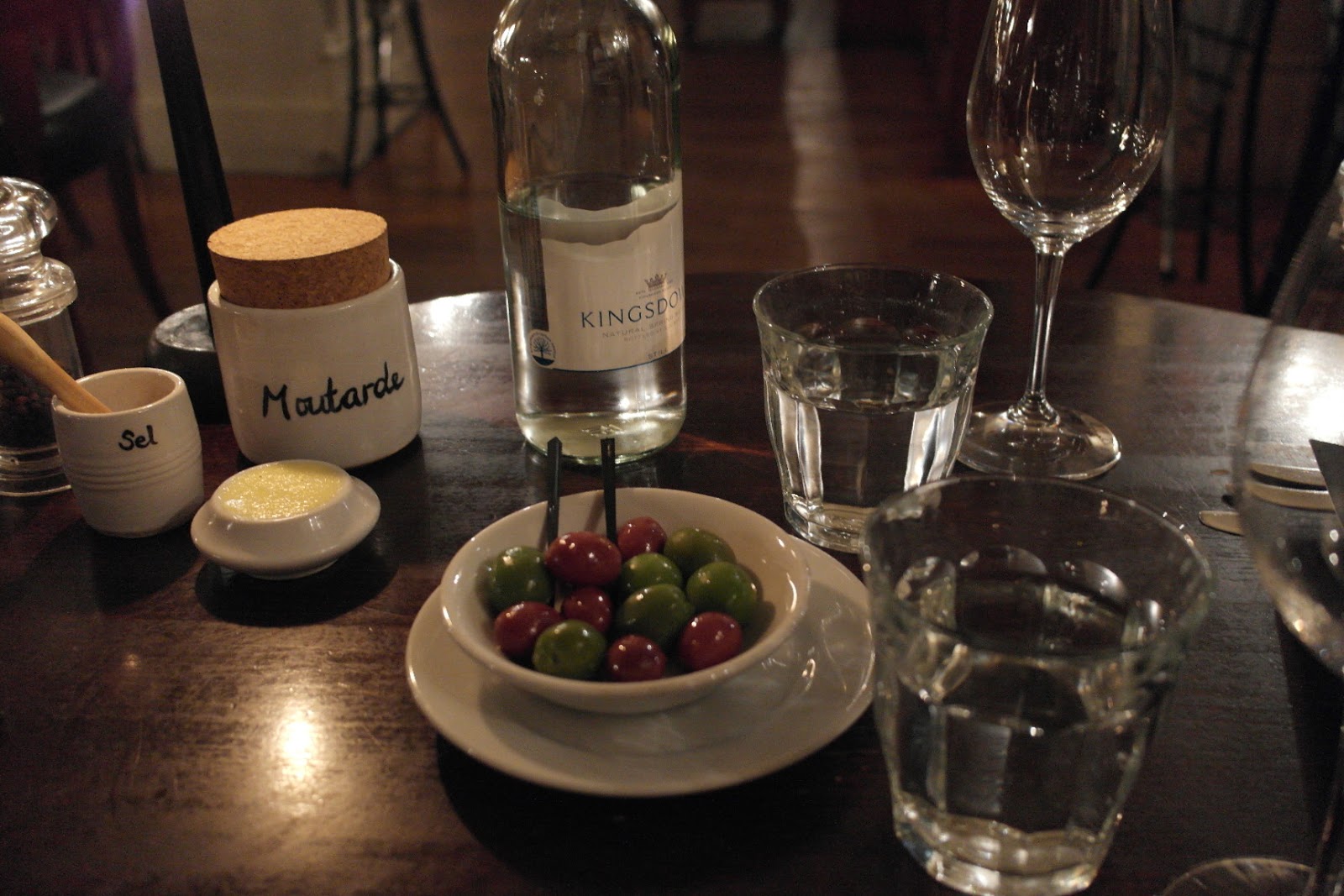 Hotel Du Vin have restaurants in Harrogate and York, we chose to visit the Harrogate restaurant. We arrived just before 6pm and made our way to the restaurant through the hotel’s entrance lobby. We were greeted by the friendly restaurant staff and asked where we would like to sit. The restaurant was really quiet at this time, there was only one other couple in at this time, after all it was quite early! 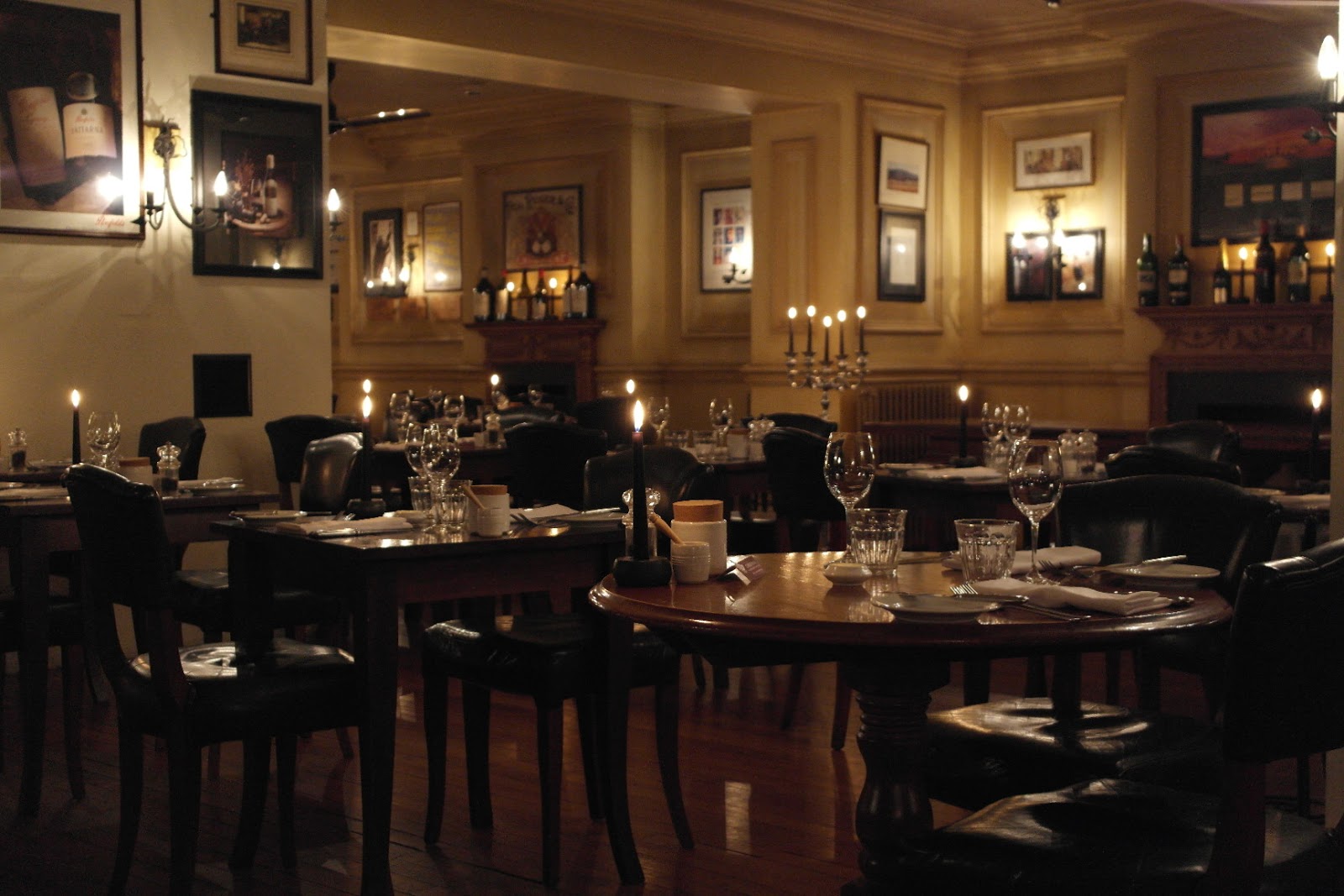 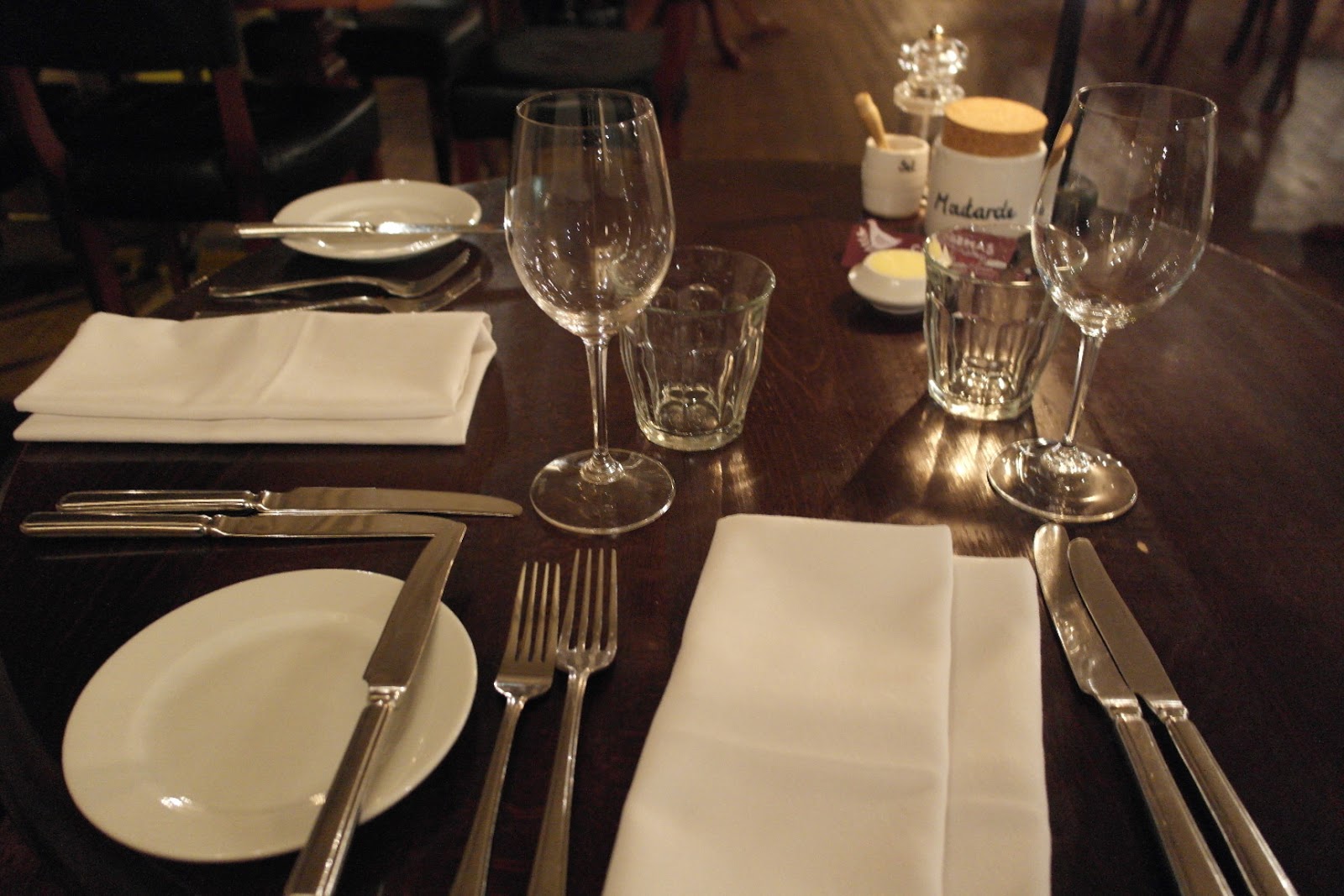 Initially, there was a bit of a mistake as we were given the a la carte menu. After a couple of minutes the waitress brought the correct set menu for us, which was a lot smaller. Our drinks orders were taken; bitter shandy for me and Sauvingnon blanc for Sam. We were also offered some freshly baked bread, there were a few varieties to choose from, I couldn’t resist trying a slice of  both the olive and white bread. 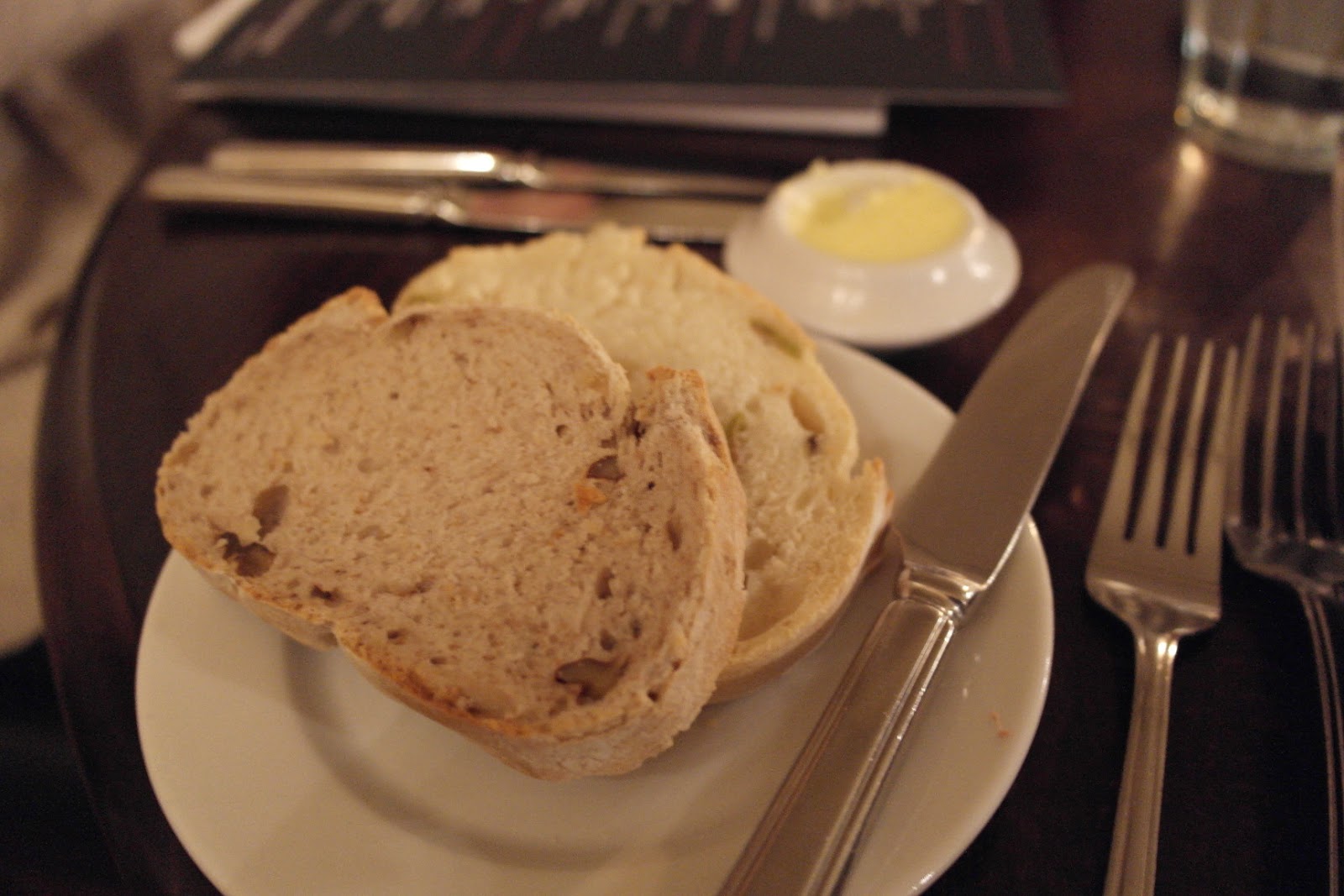 The star deal consisted of 2 courses and a cocktail for £16.95 per person. Our bramble cocktails were brought out quite early on, perhaps would of been better if we were asked when we’d like the cocktails. When asked what it was made with the waiter told me the list of ingredients, he did say it was the first one he’d ever made, but had not tried it. I didn’t think this was great as we weren’t to know whether it had the right taste and flavour because it hadn’t been checked. 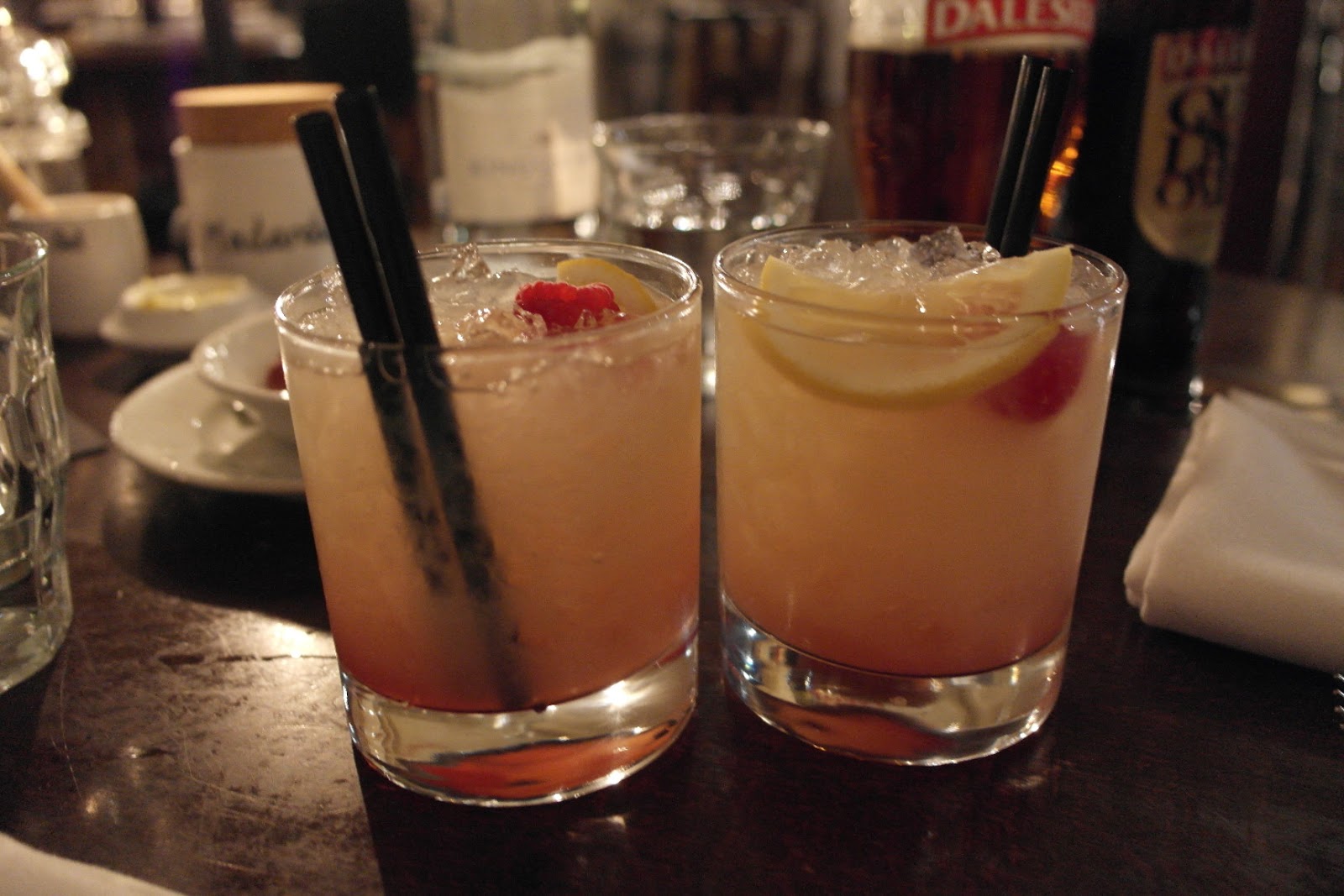 From the set menu, there was a choice of 4 starter dishes. Sam chose smoked mackerel with heritage beetroot salad, carrot rapees salad and sour cream I opted for the slightly unusual snail and meatball ragout with frisee, chive salad and crisp pancetta. 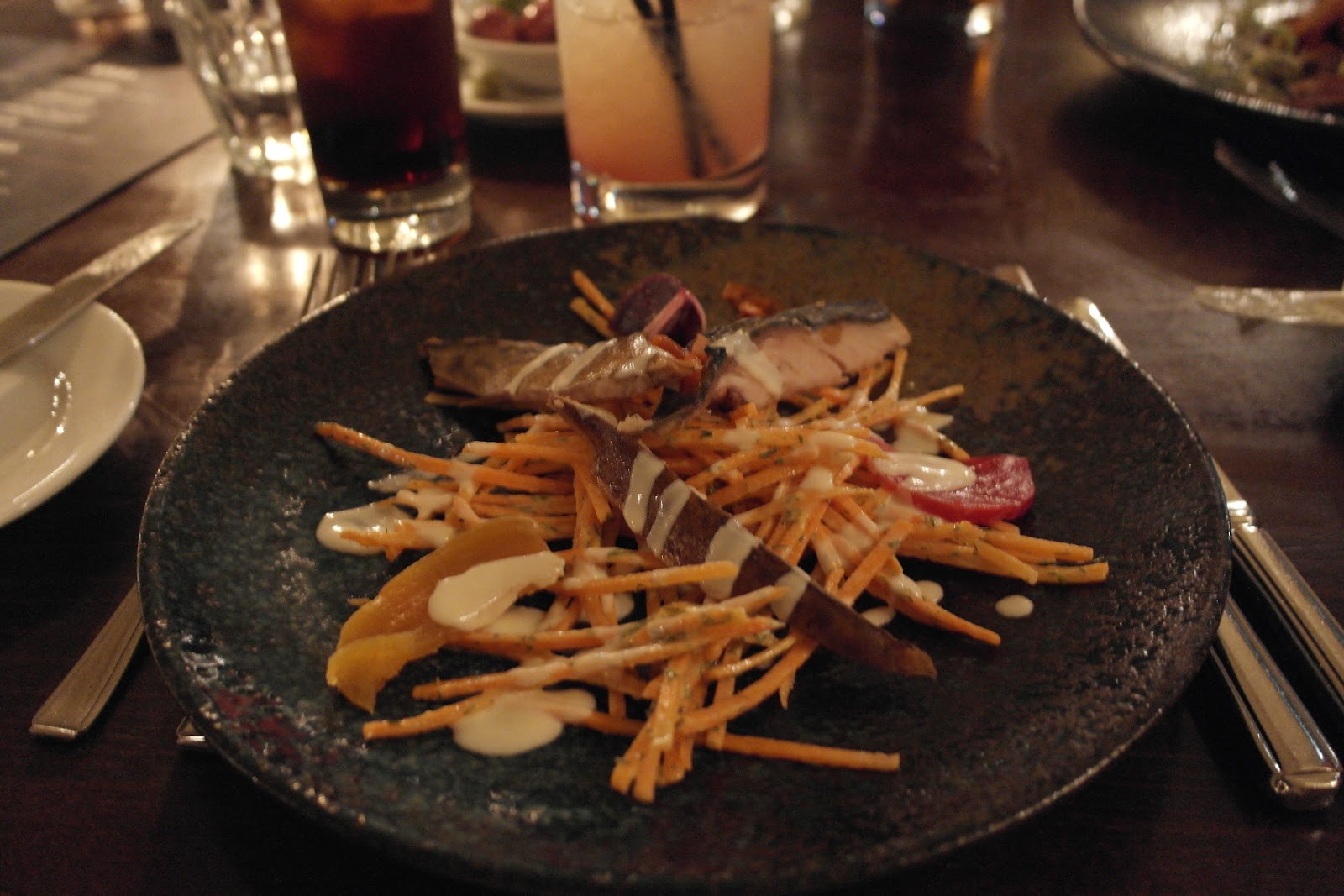 The presentation and portion size seemed appropriate for a starter. However, it didn’t seem well balanced, especially the amount of carrot to beetroot. Sam thought the large amount of grated carrott took the enjoyment out of the dish. 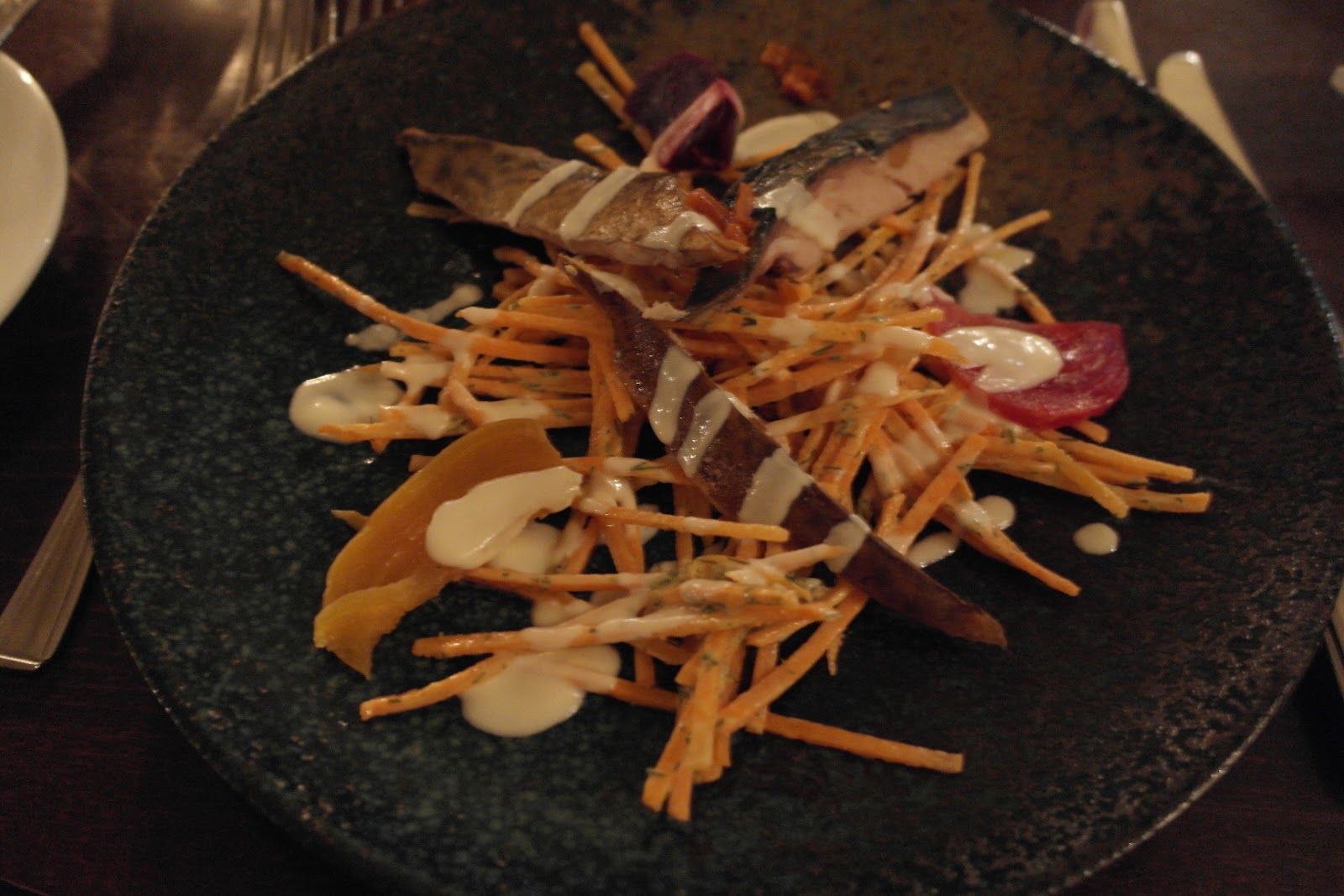 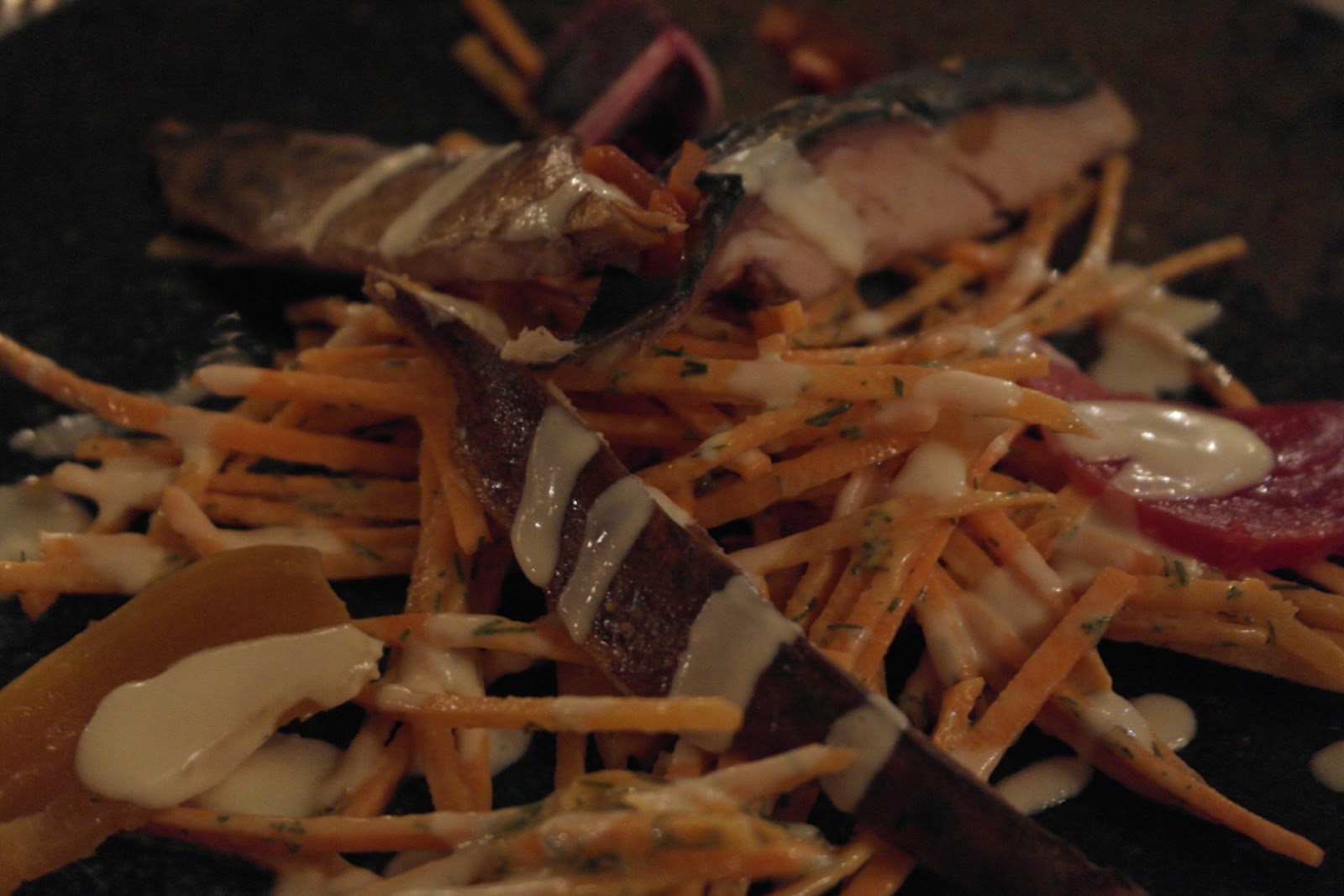 Being a lover of French cuisine, I’d actually been wanting to try snails for a while. So when I saw them on the menu and given we were in a French restaurant, it was an obvious choice for me, although I was a little apprehensive about trying them. 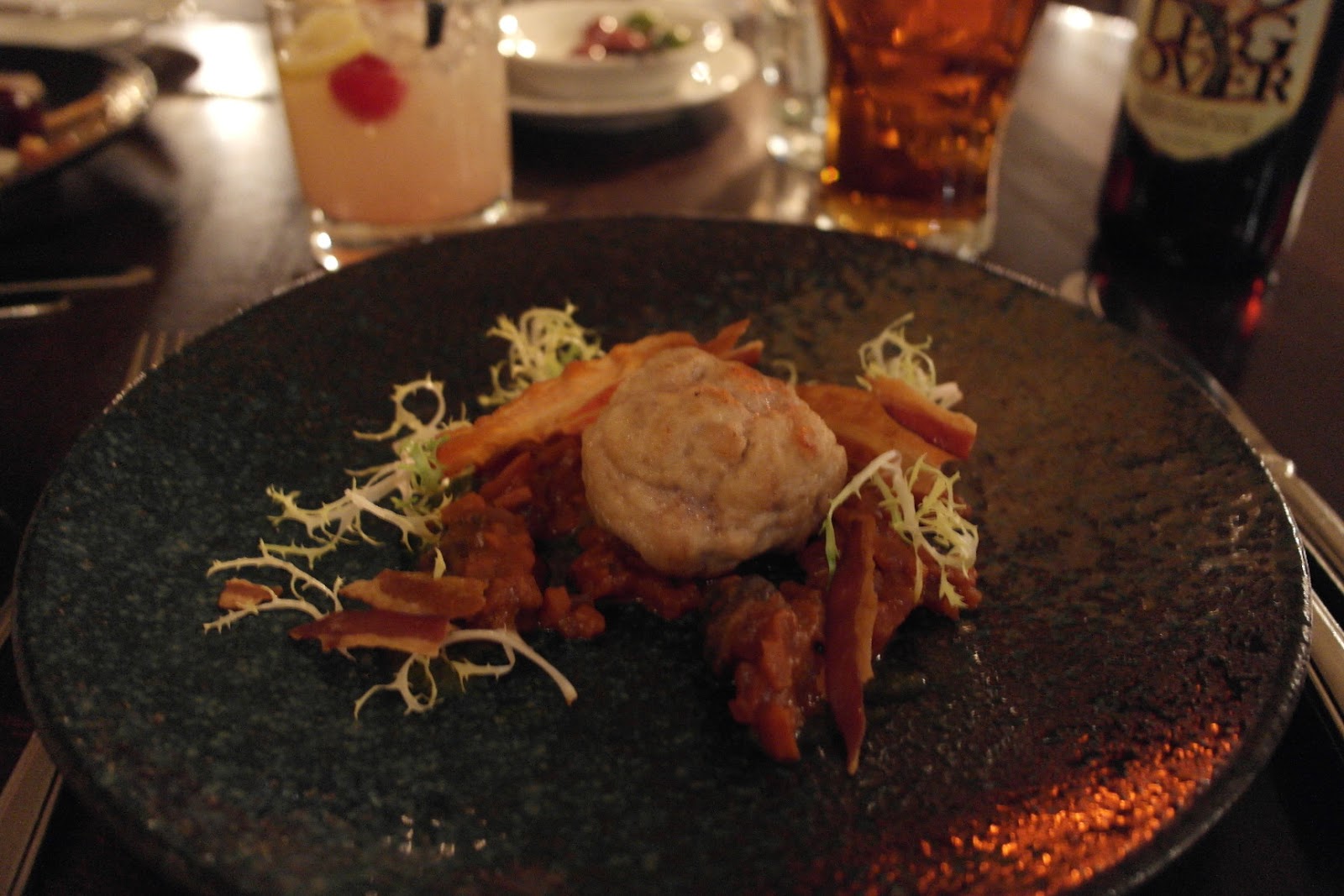 The presentation of the dish was ok, for me it didn’t quite have that wow factor. There was only one meatball and only a few snails.  The meatball ragu was nice, in flavour and texture. I found the snails had a very unique earthy flavour and slightly rubbery texture. I couldn’t make up my mind if I like them or not, definitely an acquired taste. 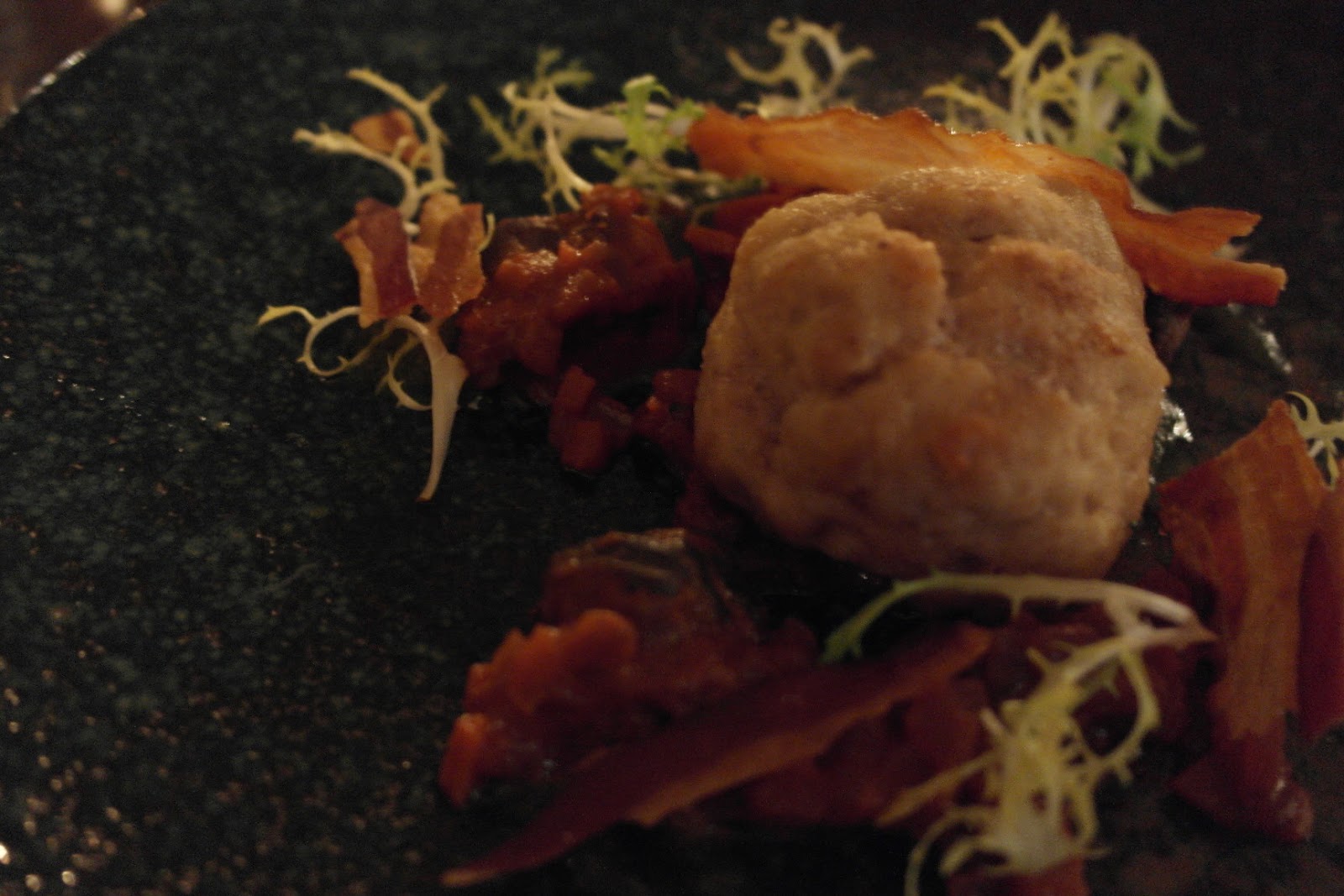 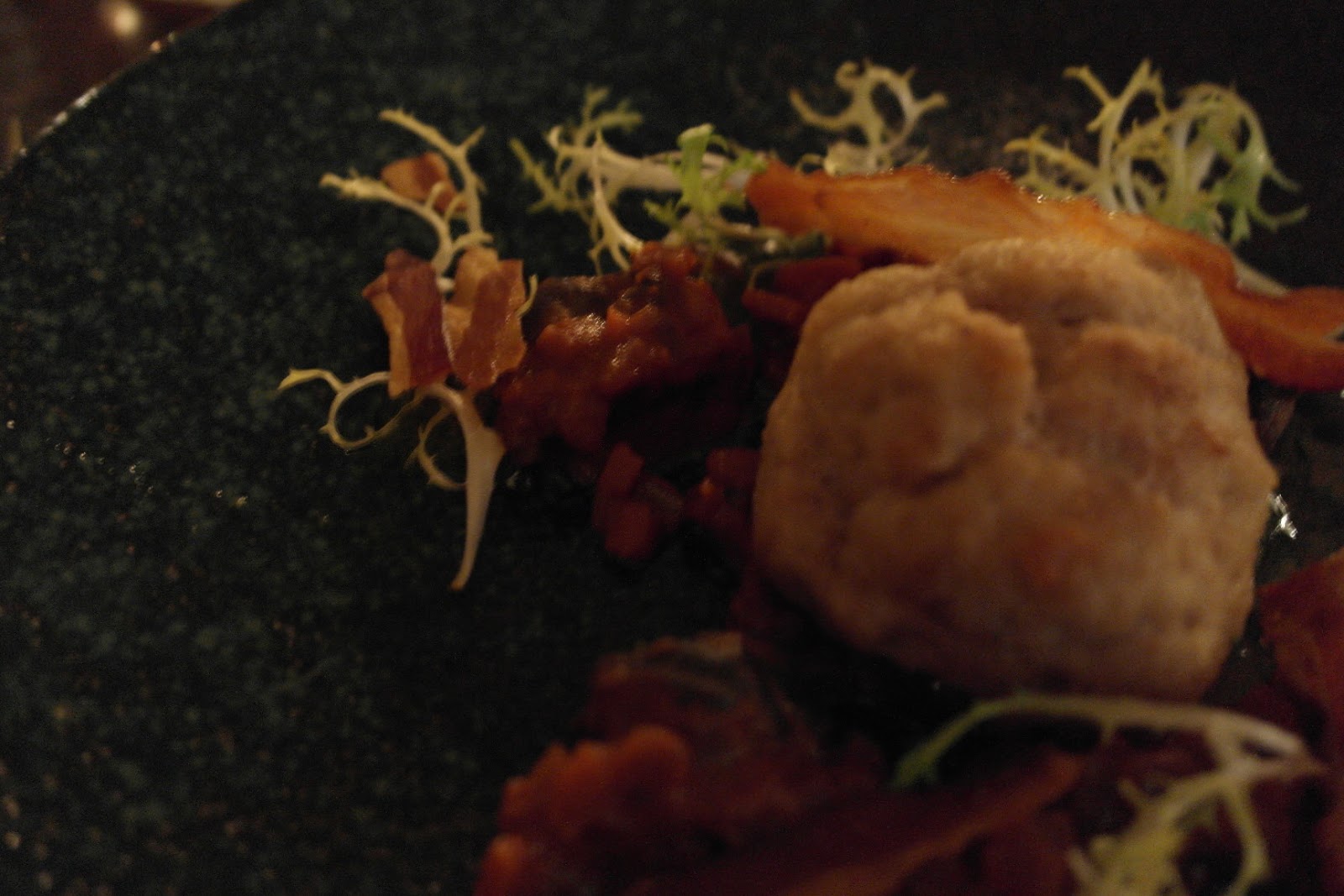 For main course, Sam chose Poached egg and avacado on toast with tomato salsa and crushed chilli. I went for the Normandy chicken burger with pancetta jam and Camembert cheese. 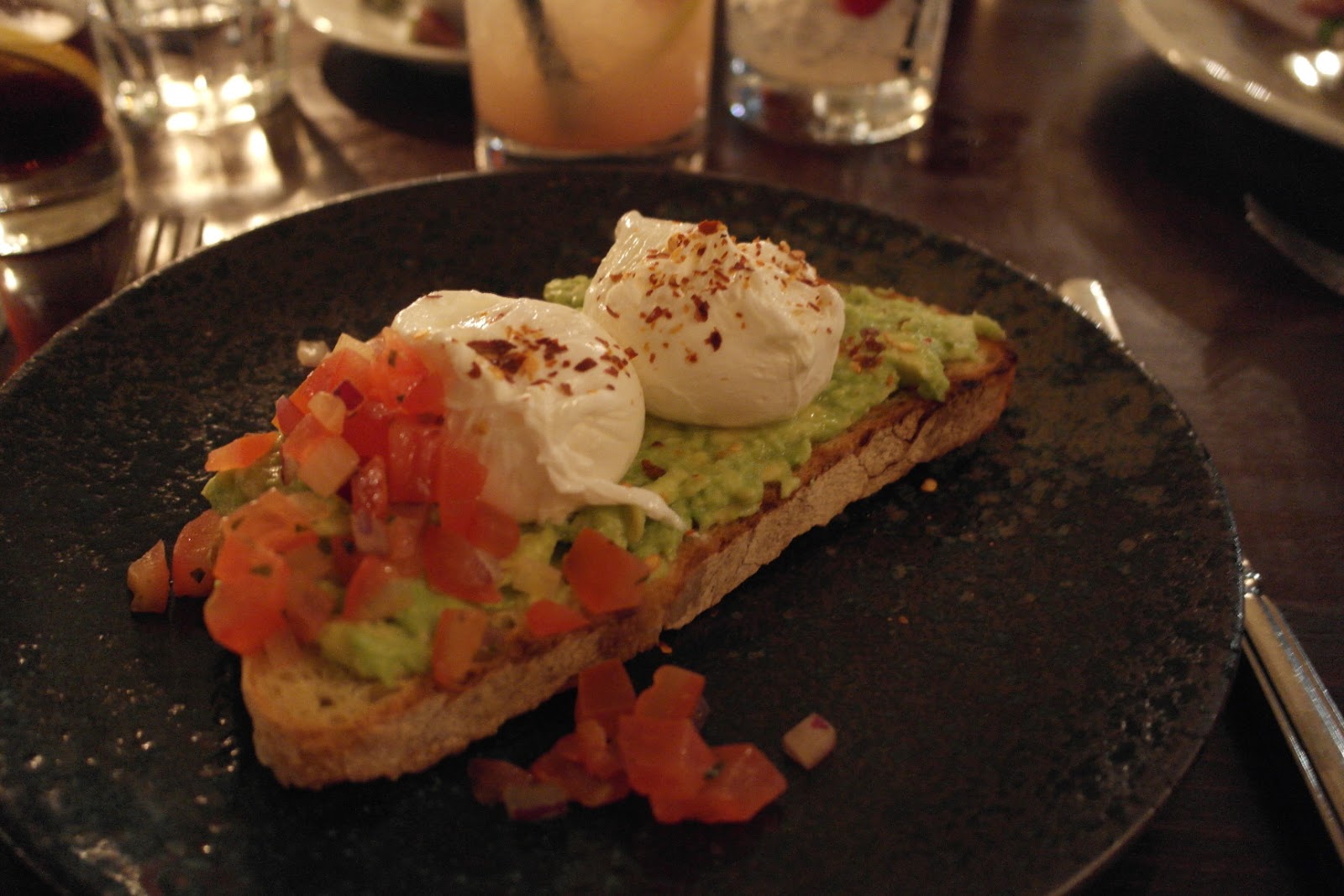 Poached eggs on toast isn’t really a main course, no matter how its served. I’d say its more suited to being a Brunch dish. The eggs seemed to be cooked well and had a lovely runny yoke, who doesn’t love it when the yolk runs? 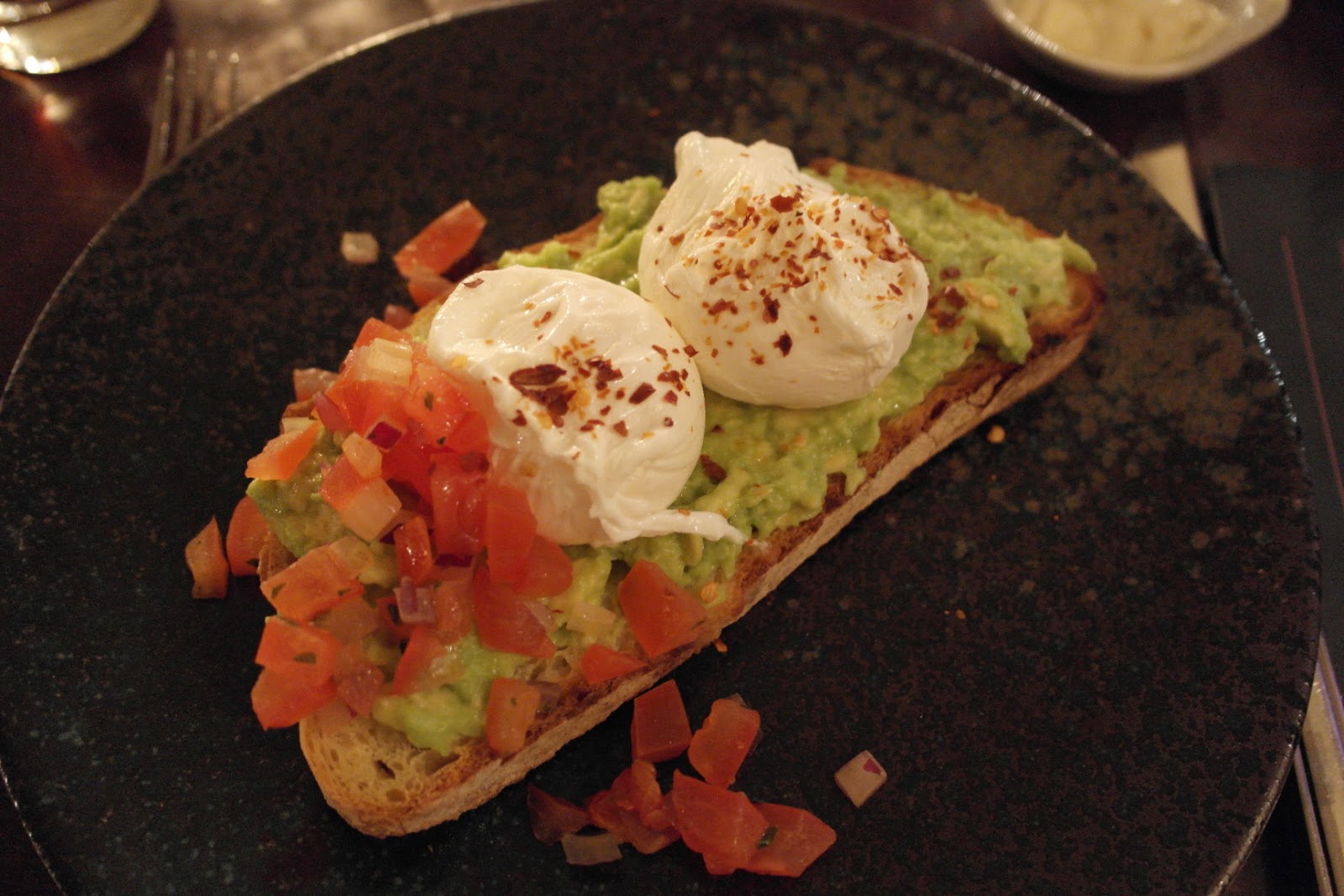 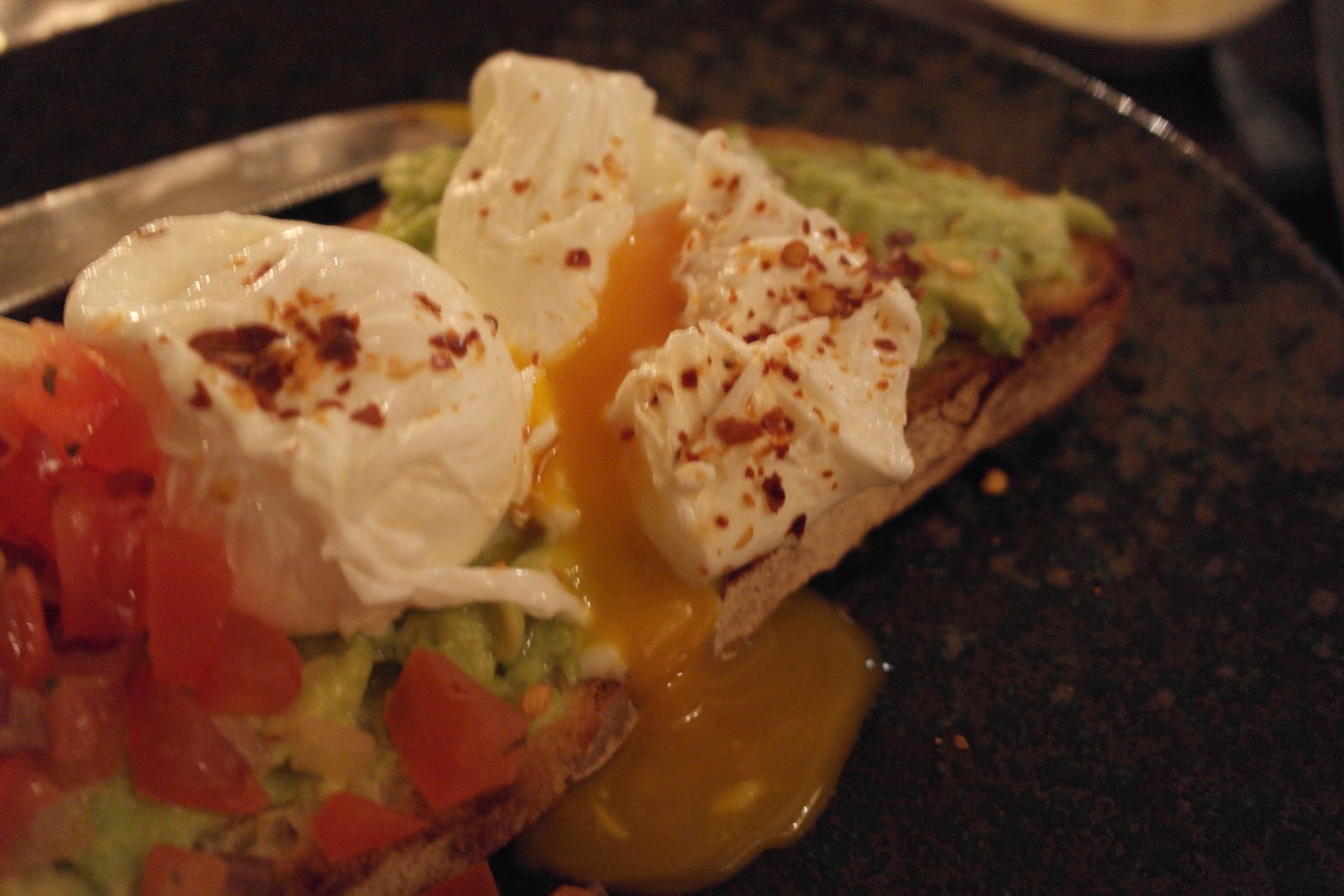 I was expecting my Normandy chicken burger to be a nice piece of grilled chicken, I was a little surprised when I found it was in fact a minced chicken burger. 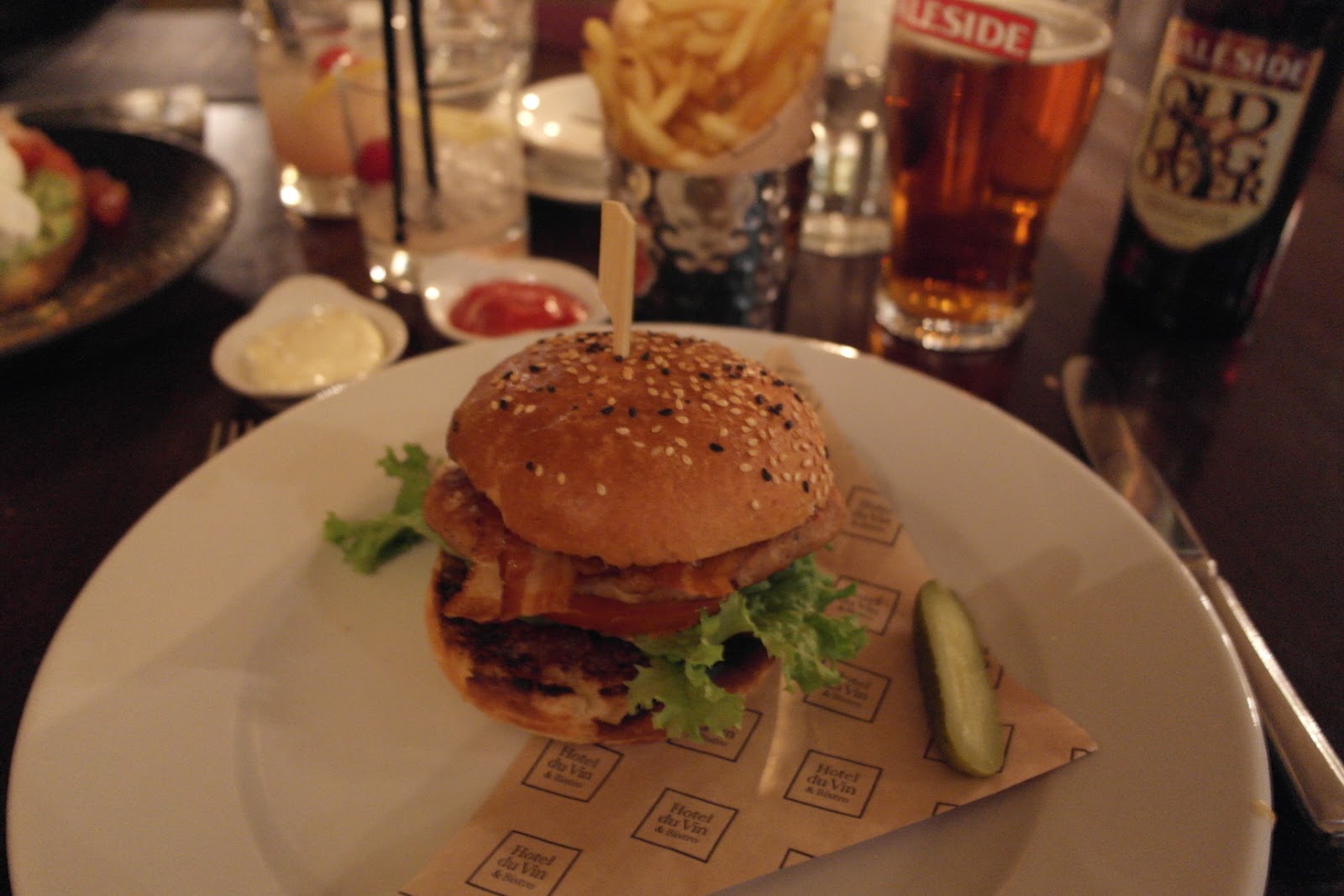 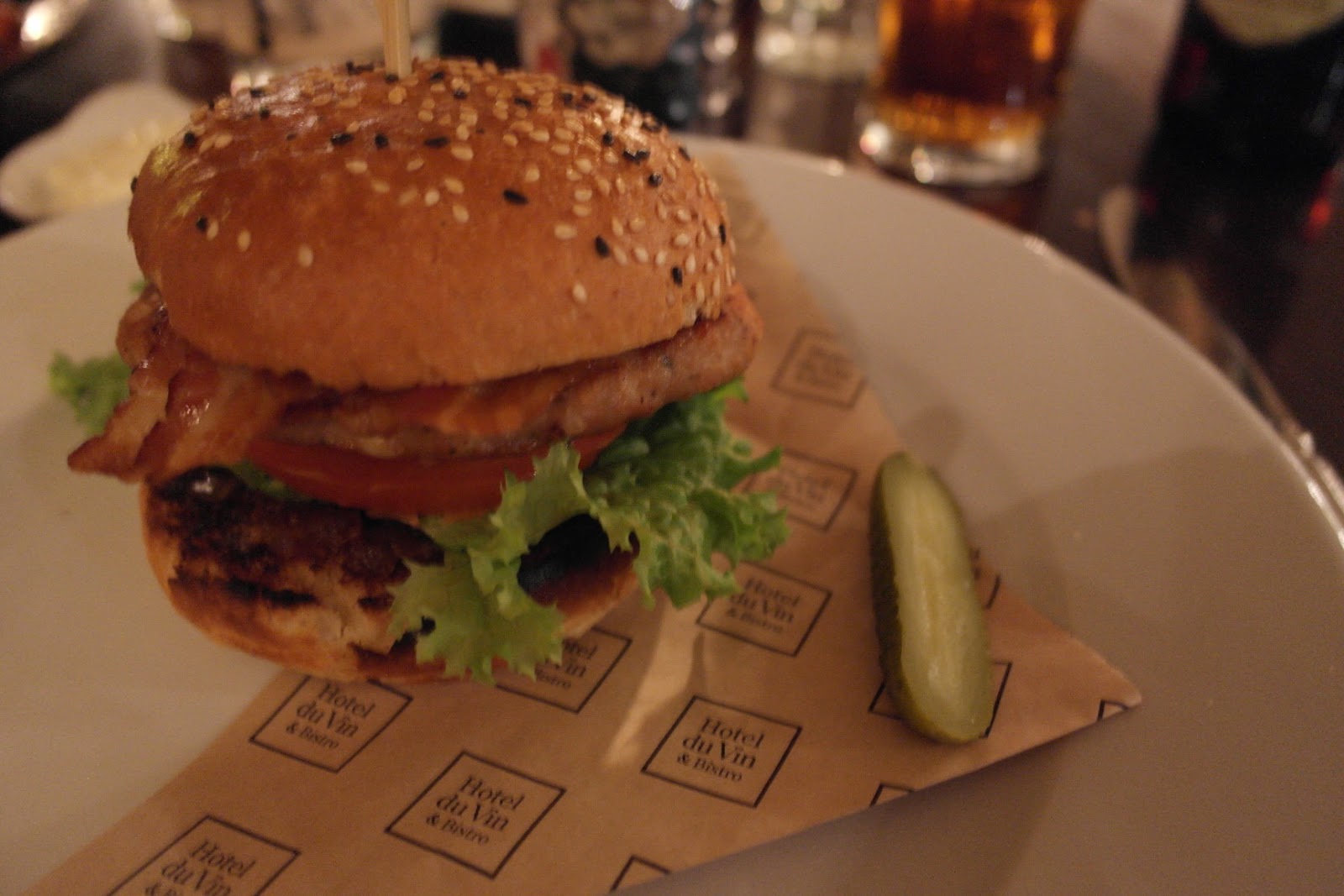 For me personally, I didn’t think the streaky bacon was needed, the salty bacon flavour was a little over powering and the burger was already sufficiently seasoned. I asked the waitress what the burger was, she didn’t know and speak to the kitchen. I was told it was minced chicken mixed together with herbs and seasoning. I couldn’t quite understand why you’d want to mince a perfectly good piece of chicken. I mean, it would be like mincing topside beef! 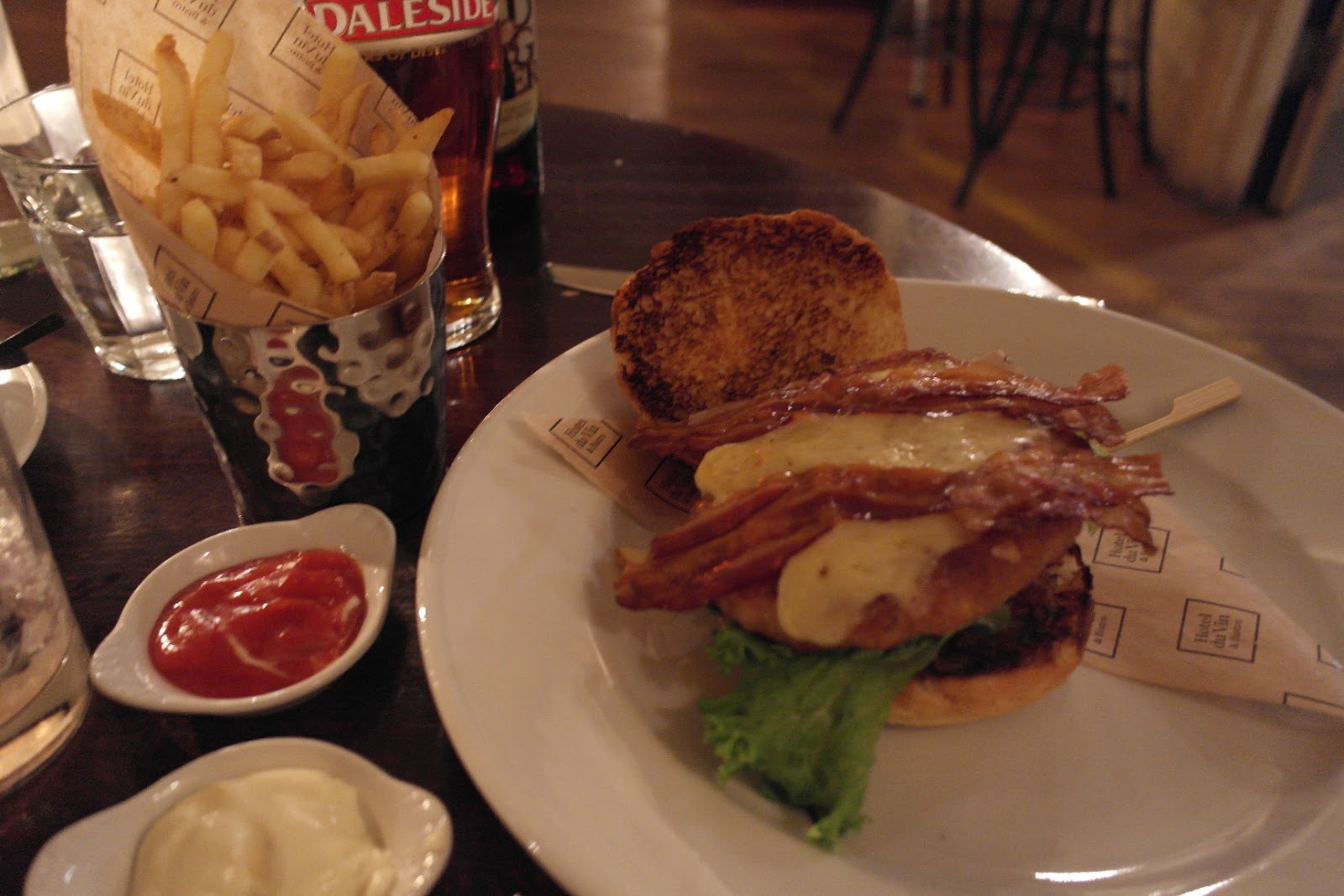 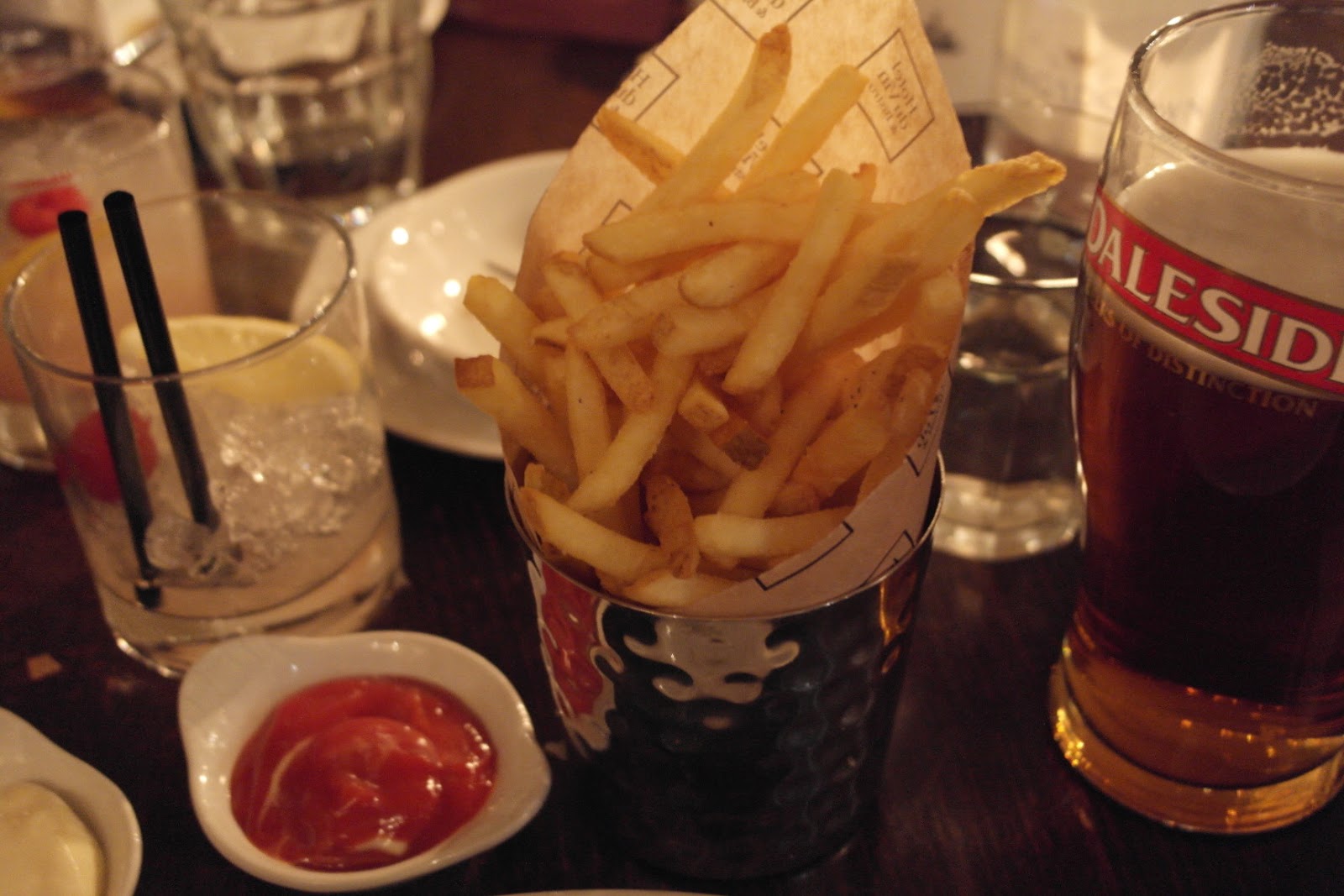 We couldn’t resist finishing the evening by trying some of the desserts. I chose the brillat-savarin cheese cake and Sam went for the tarte fine aux pommes with calvados icecream. 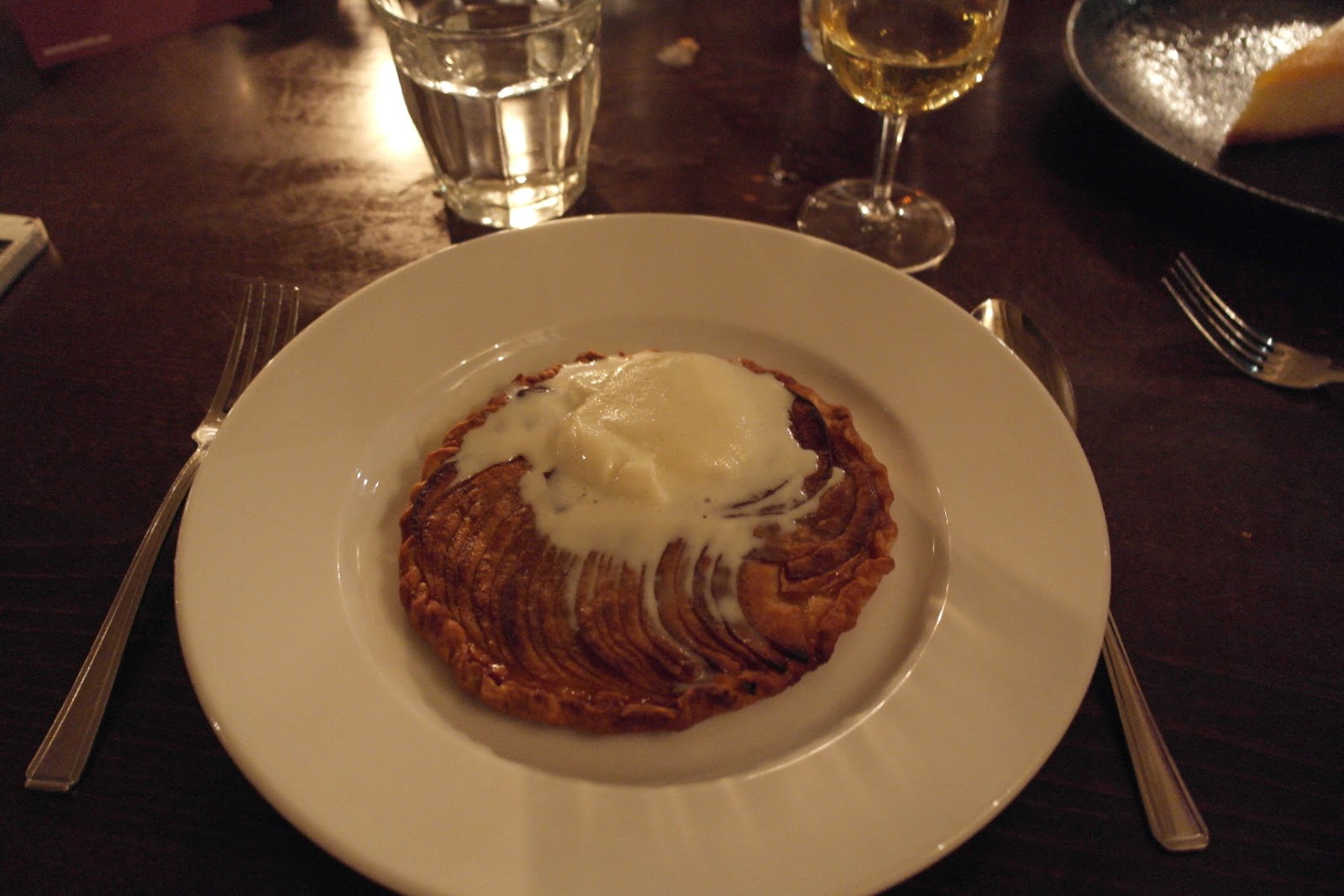 The size of the tart did seem quite large for a dessert in comparison to my slice of cheese cake. I did try a piece for review purposes, it had a nice flavour, perhaps a tiny bit overcooked. I think it would have been maybe better served with fresh cream instead of ice cream. 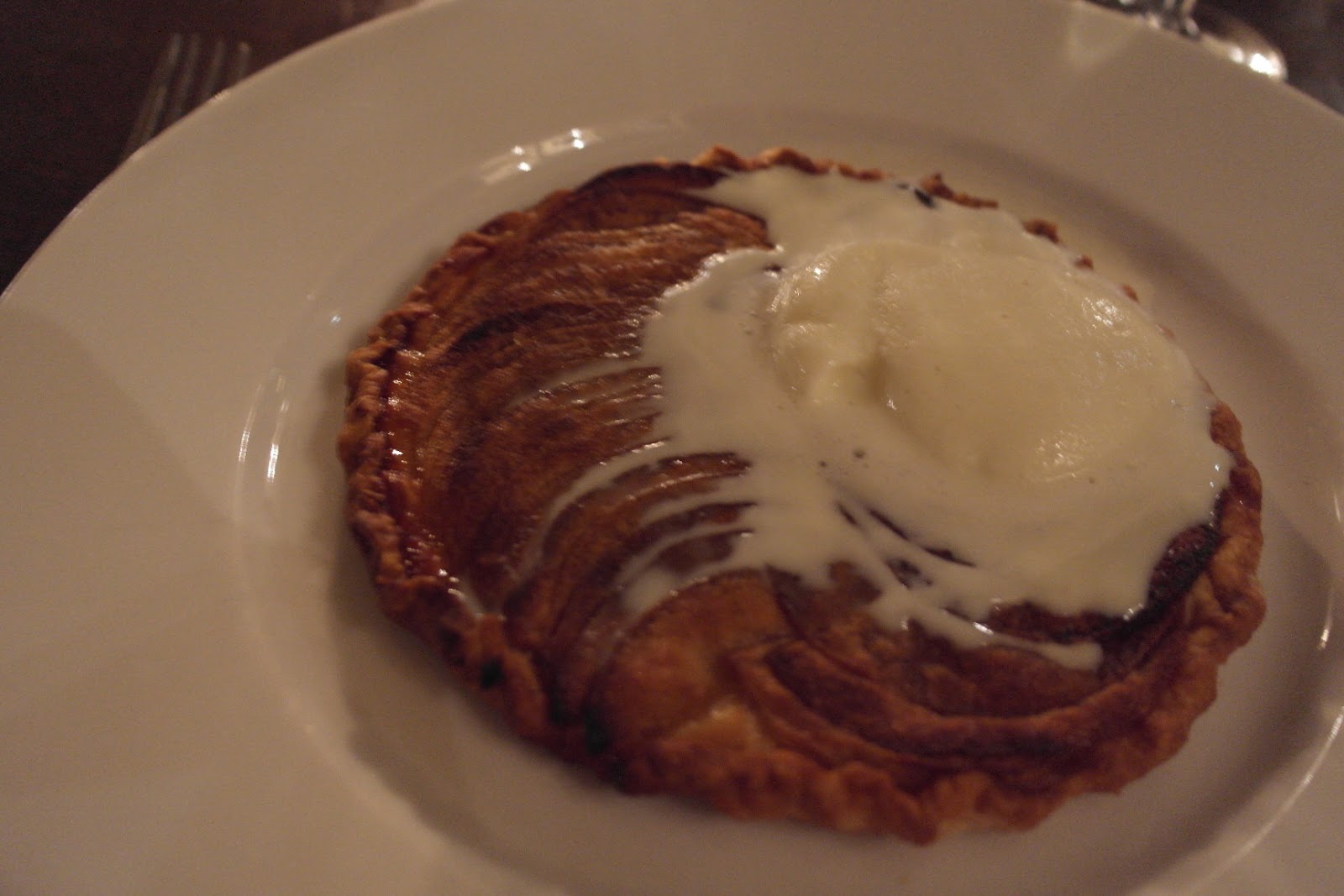 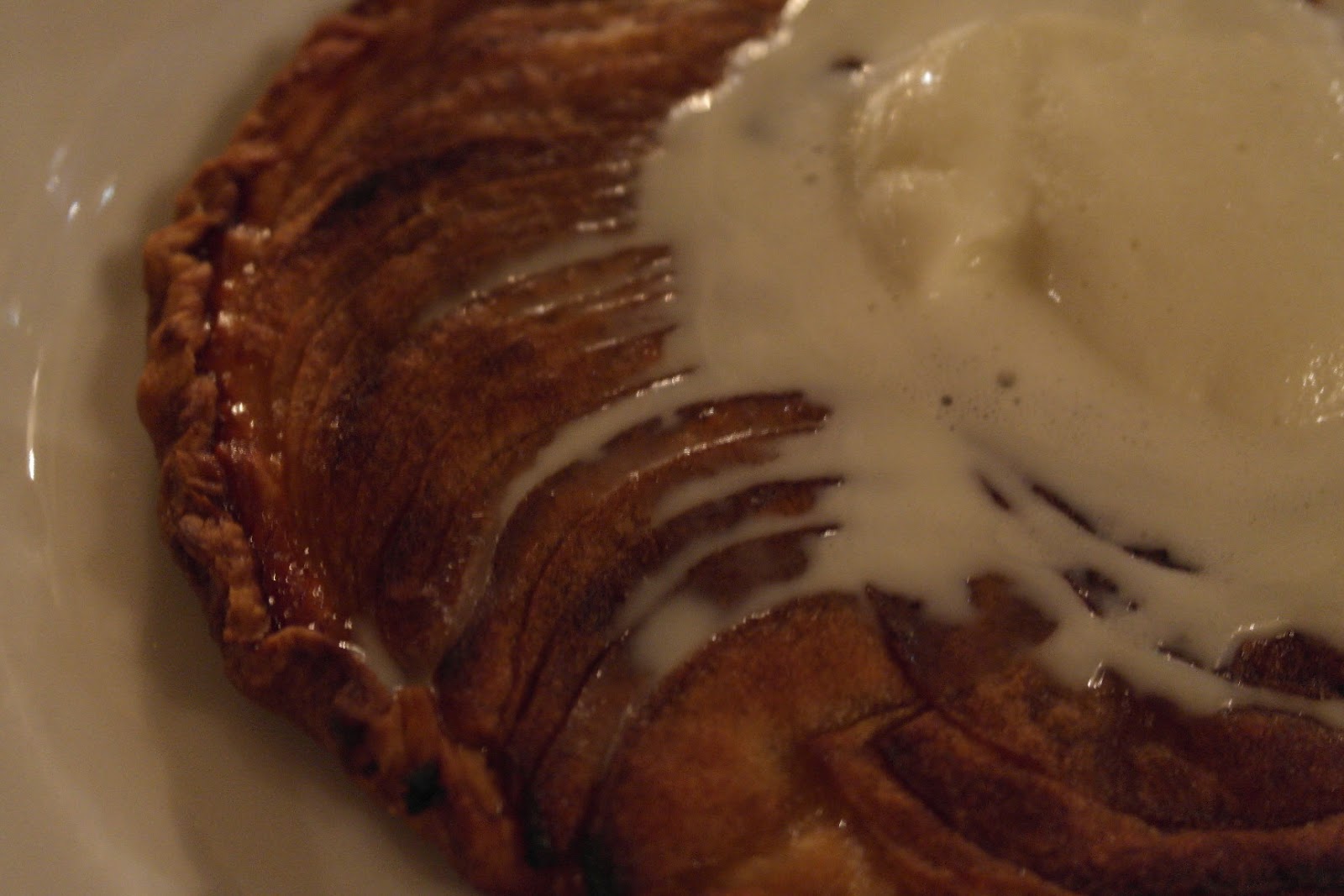 I thought the presentation of the cheese cake was a bit lacking, the portion size seemed about right. For me, it didn’t have the typical flavour you’d expect from a cheese cake. For me, there was a little too much gelatin in the bitter orange jelly. 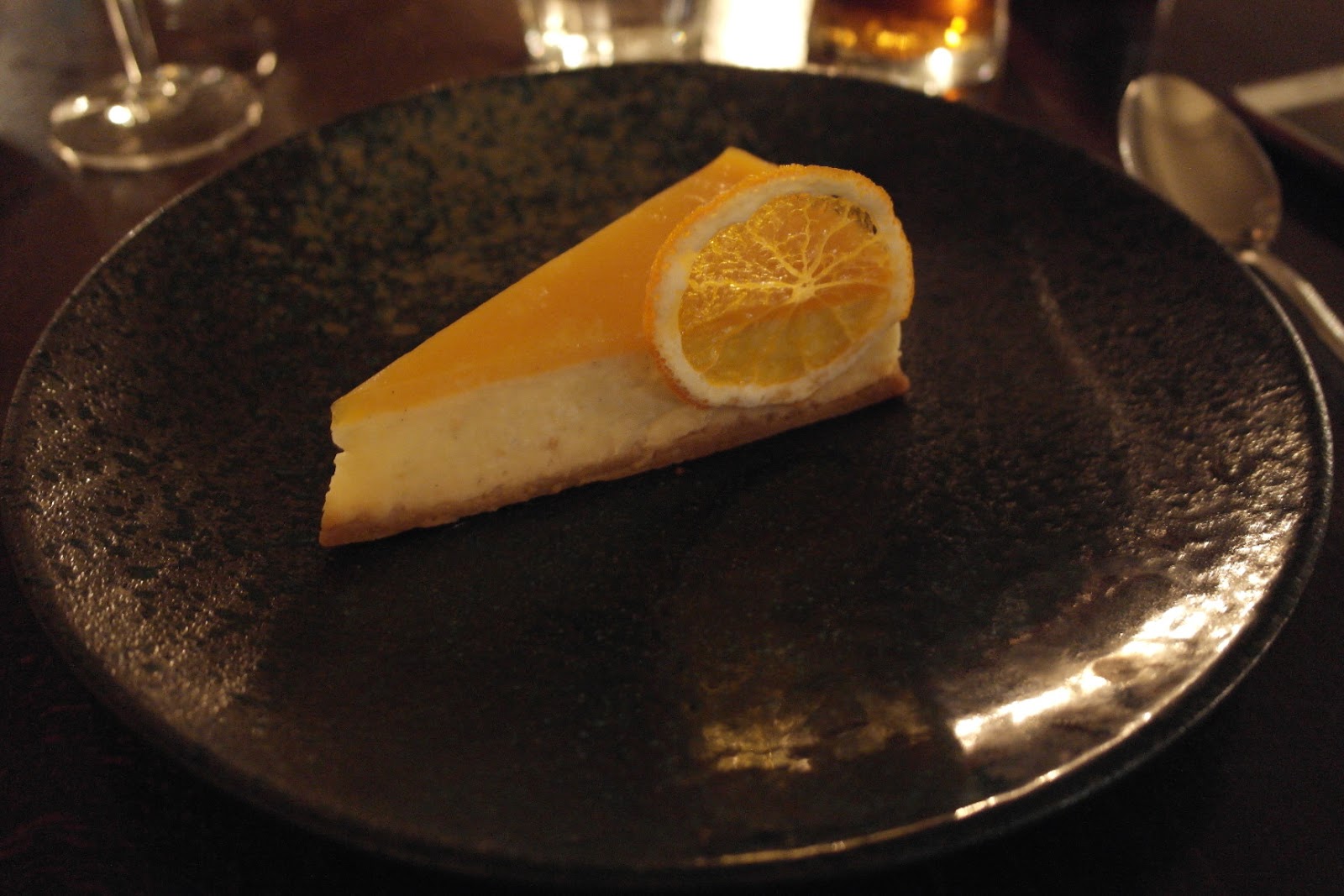 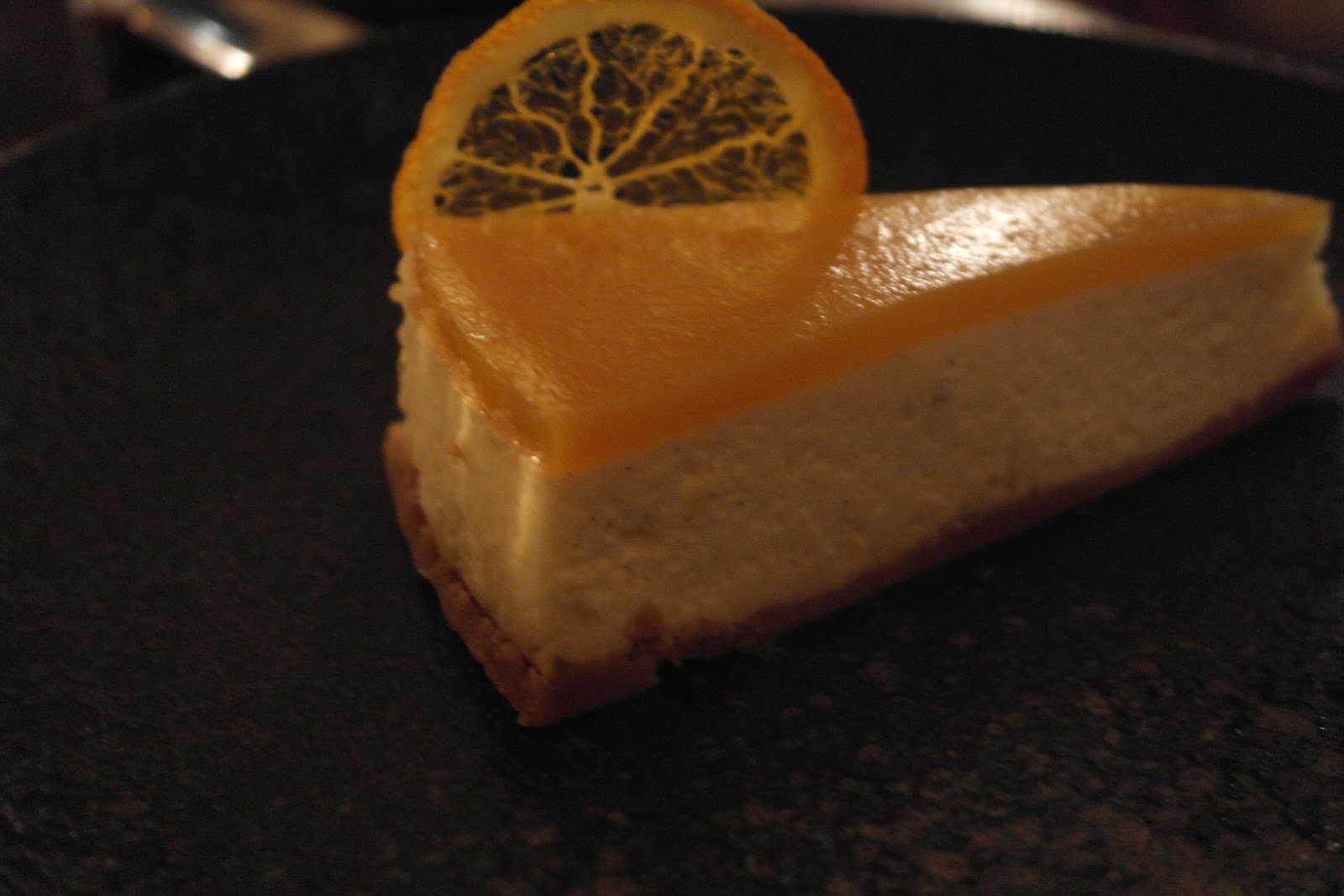 Overall, I though the service at Hotel Du Vin was very good. The very limited choice of dishes on the menu, for me, let the star deal down. I didn’t think the offerings on the set menu were very French at all, giving something a French name like my burger doesn’t automatically make it a French dish. However, I would return to try their a la carte menu as judging from the few dishes I saw, seemed to tick a few boxes you’d expect from a elegant French restaurant. You can check out Hotel Du Vin’s site here

Have you dined at Hotel Du Vin? What did you think, let me know in the comments below.

*Food and drinks were complimentary for review purposes. All views are my own.