A few weeks ago I saw an online ad that The Star Inn The City were putting on an Autumn Game Dinner, being hosted by Michelin Star chef Andrew Pern. I’ve been wanting to visit The Star Inn at Harome for a while, but visiting their sister pub and having a menu prepared by Andrew Pern is just as good, right? 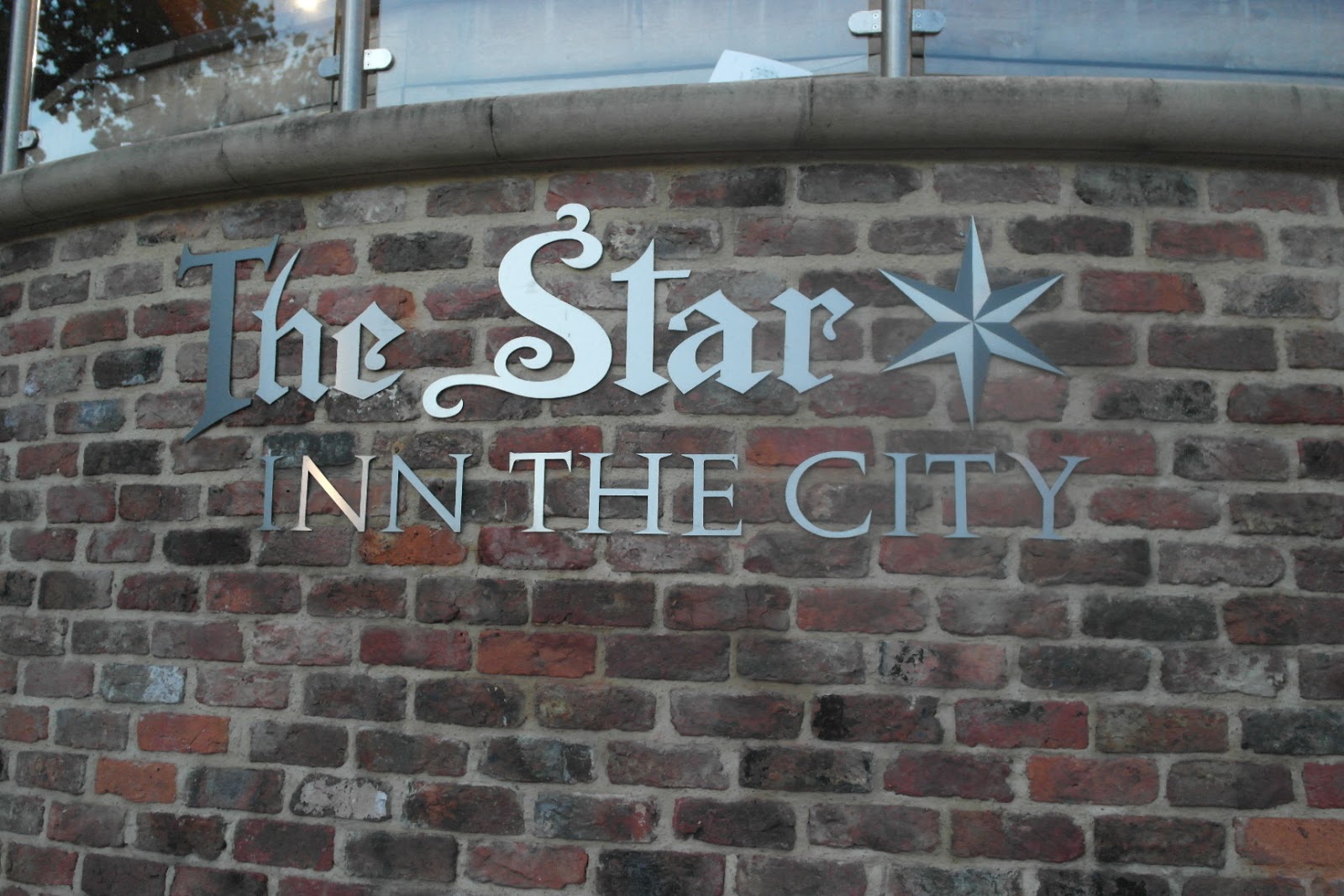 The Star Inn The City is located on the edge of York’s museum gardens close to Lendal Bridge and has a absolutely fantastic riverside setting. Andrew Pern has held a Michelin star for ten years and has brought taste of the countryside to the city. The Autumn Game Dinner consisted of 5 different courses featuring some of the the best flavours the Yorkshire Game larder has to offer and was part of the York Food & Drink Festival. 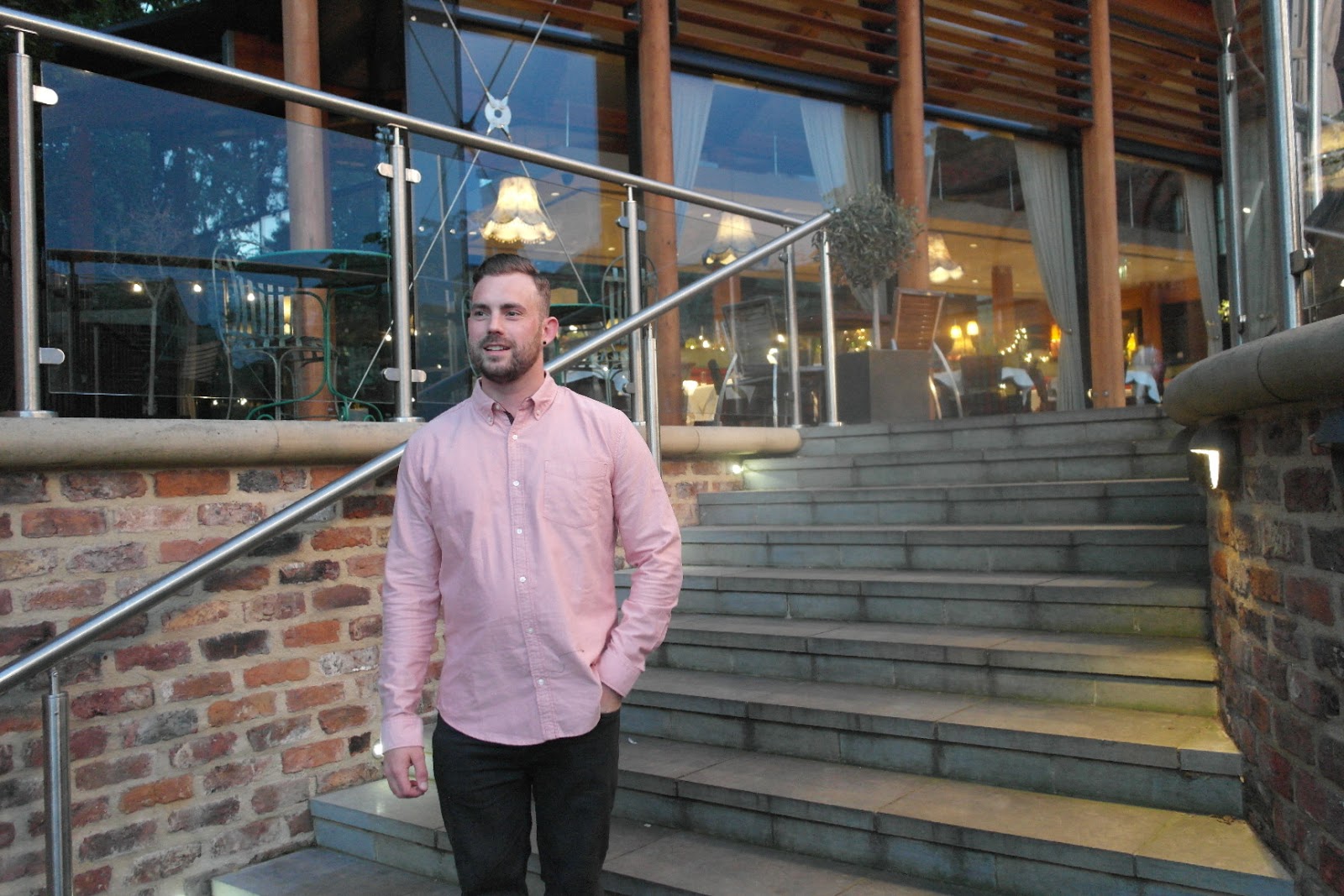 We arrived in York just after 7pm and had time for a quick drink on the elegantly lit outdoor terrace before heading inside to take our seats in the main dining area. Its airy and welcoming, but with a classical feel, yet with a modern twist having floor to ceiling windows which overlook the river. 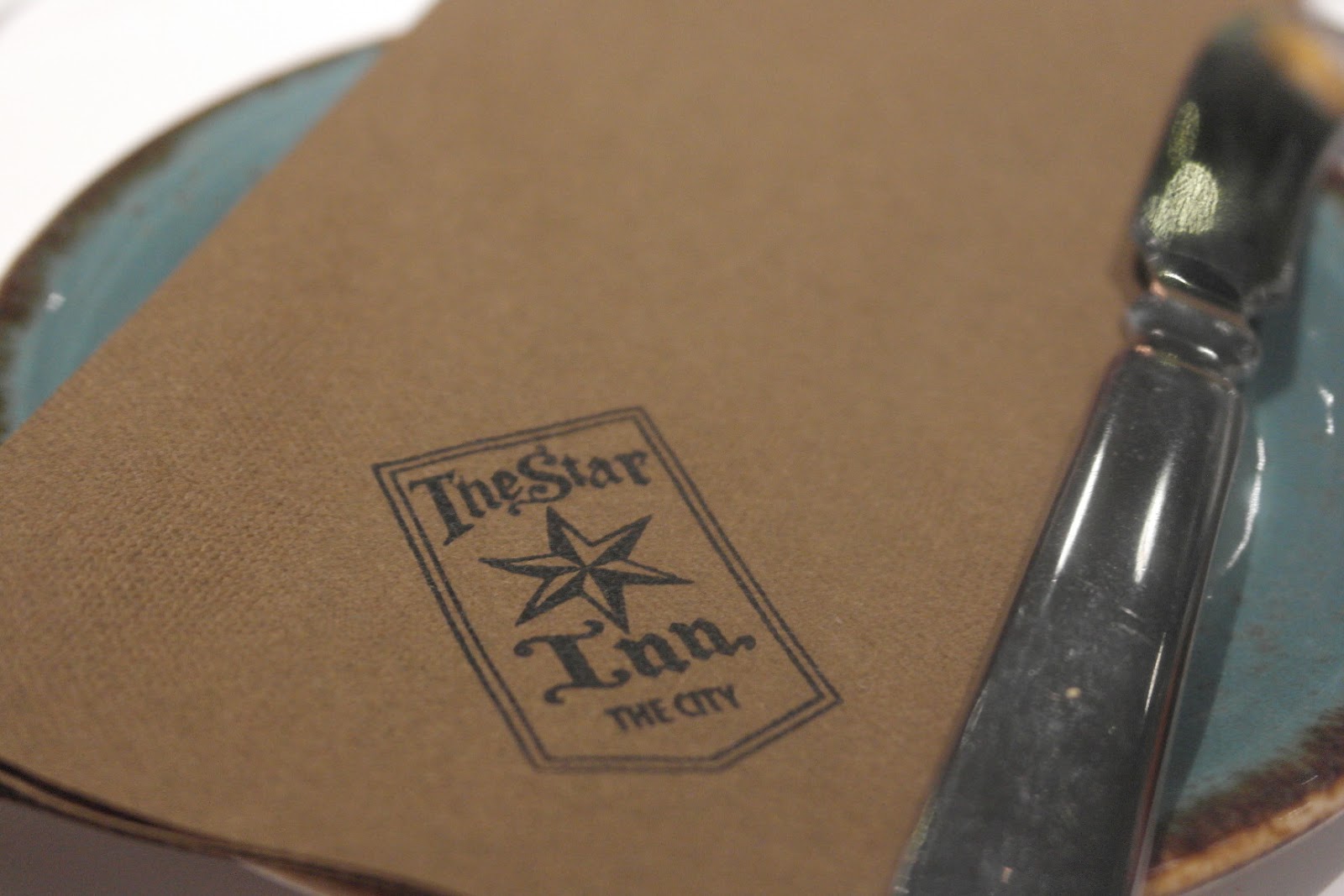 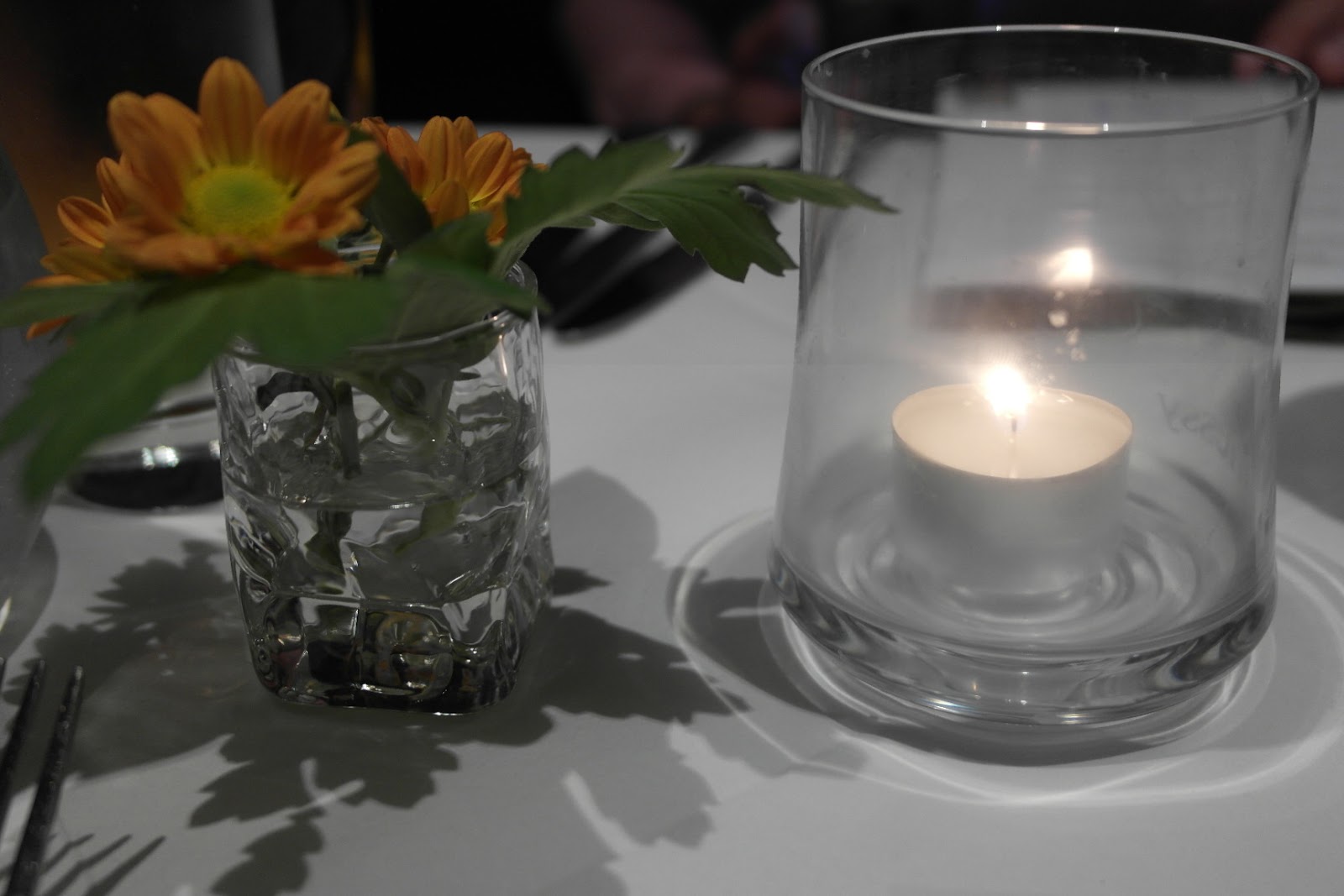 The evening started with a selection of canapes, Game inspired obviously. We were served Smoked Salmon, Confit of wild duck sauage roll and Smoked pigeon on game chip. 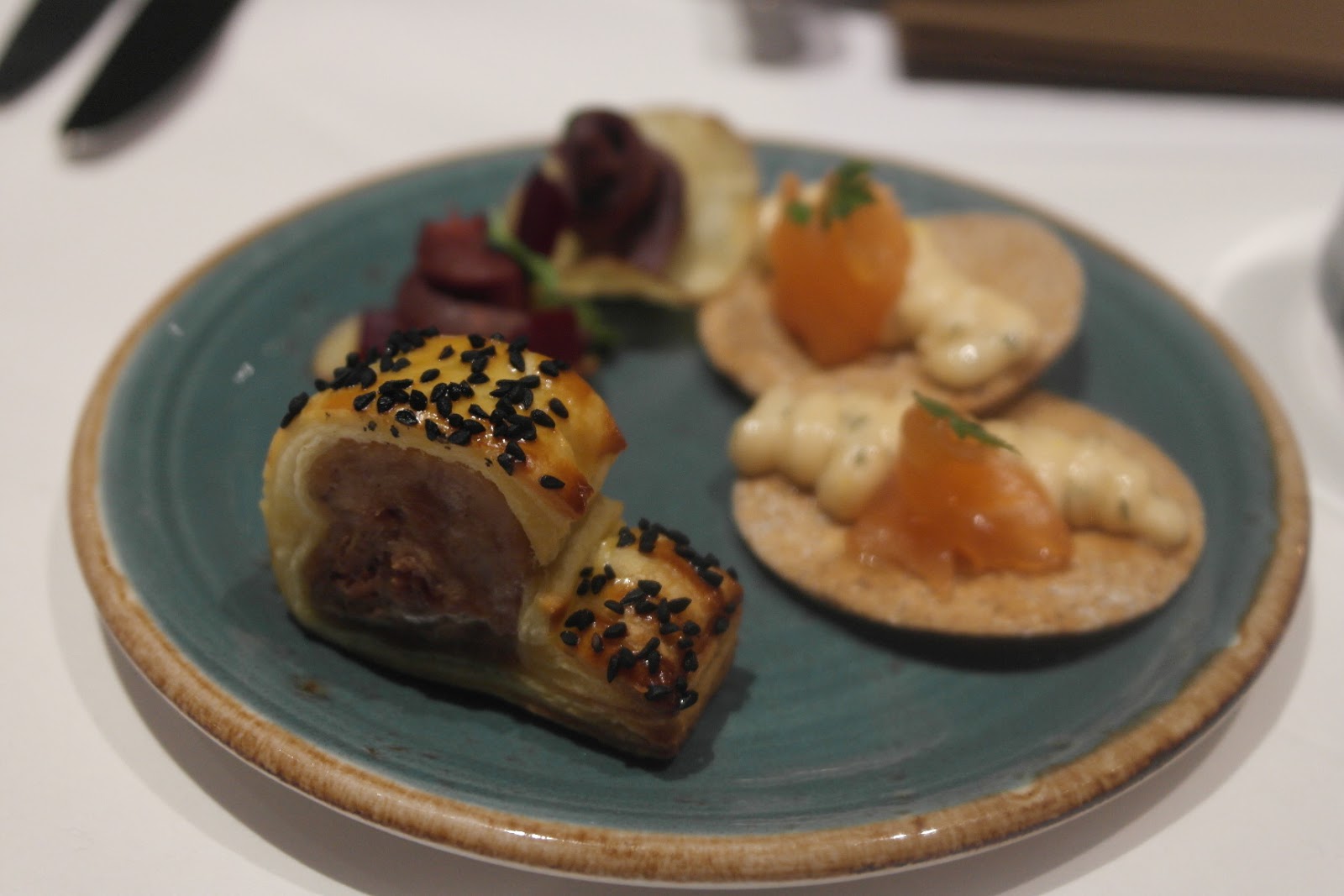 All 3 canapes were delicious, my favourite being the delicately smoked pigeon breast on a game chip. 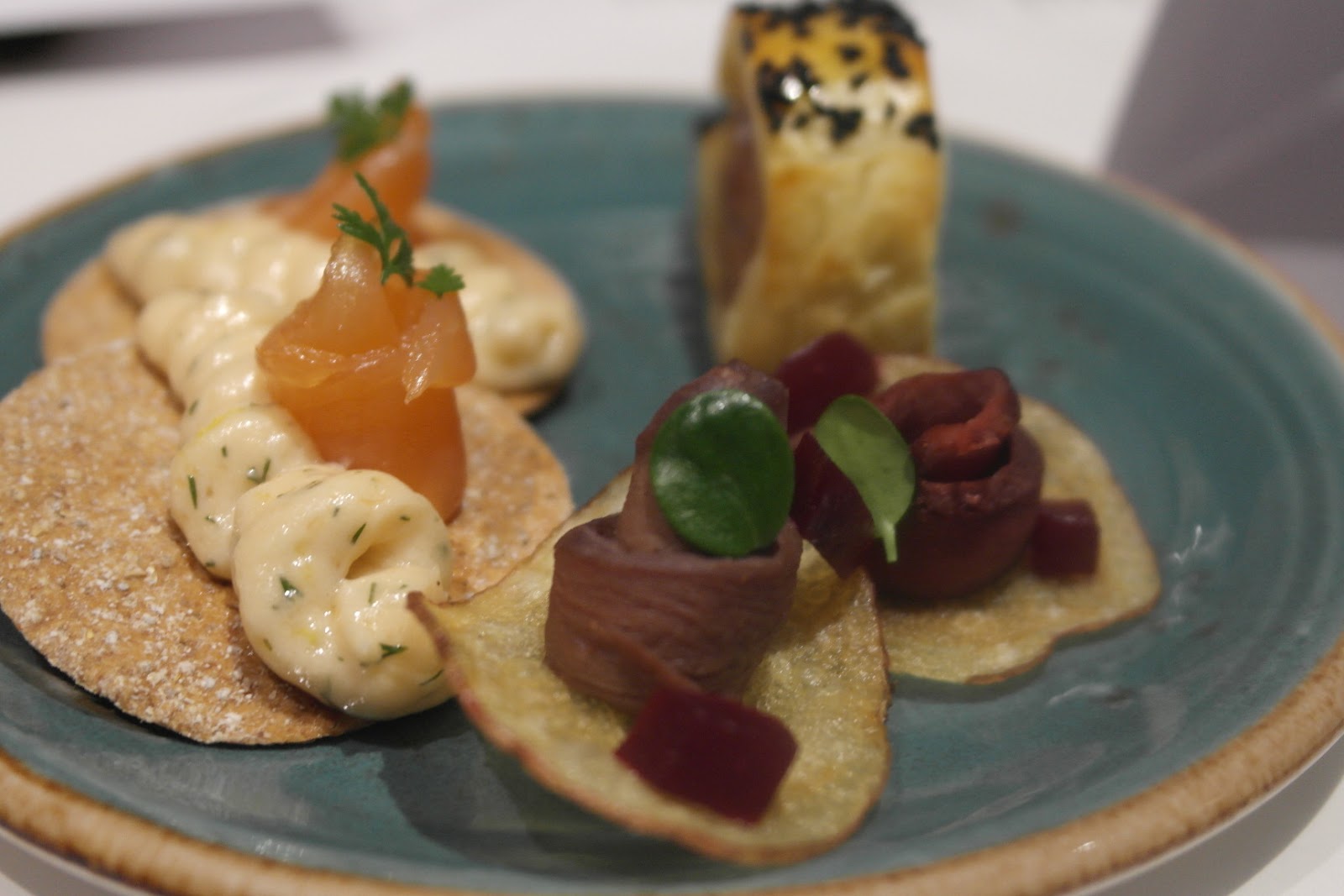 We were also brought some olive bread whilst we looked over the evening’s menu. Although I’m a big fan of olives, I’d never tried olive bread  before, but what a great combination it was! 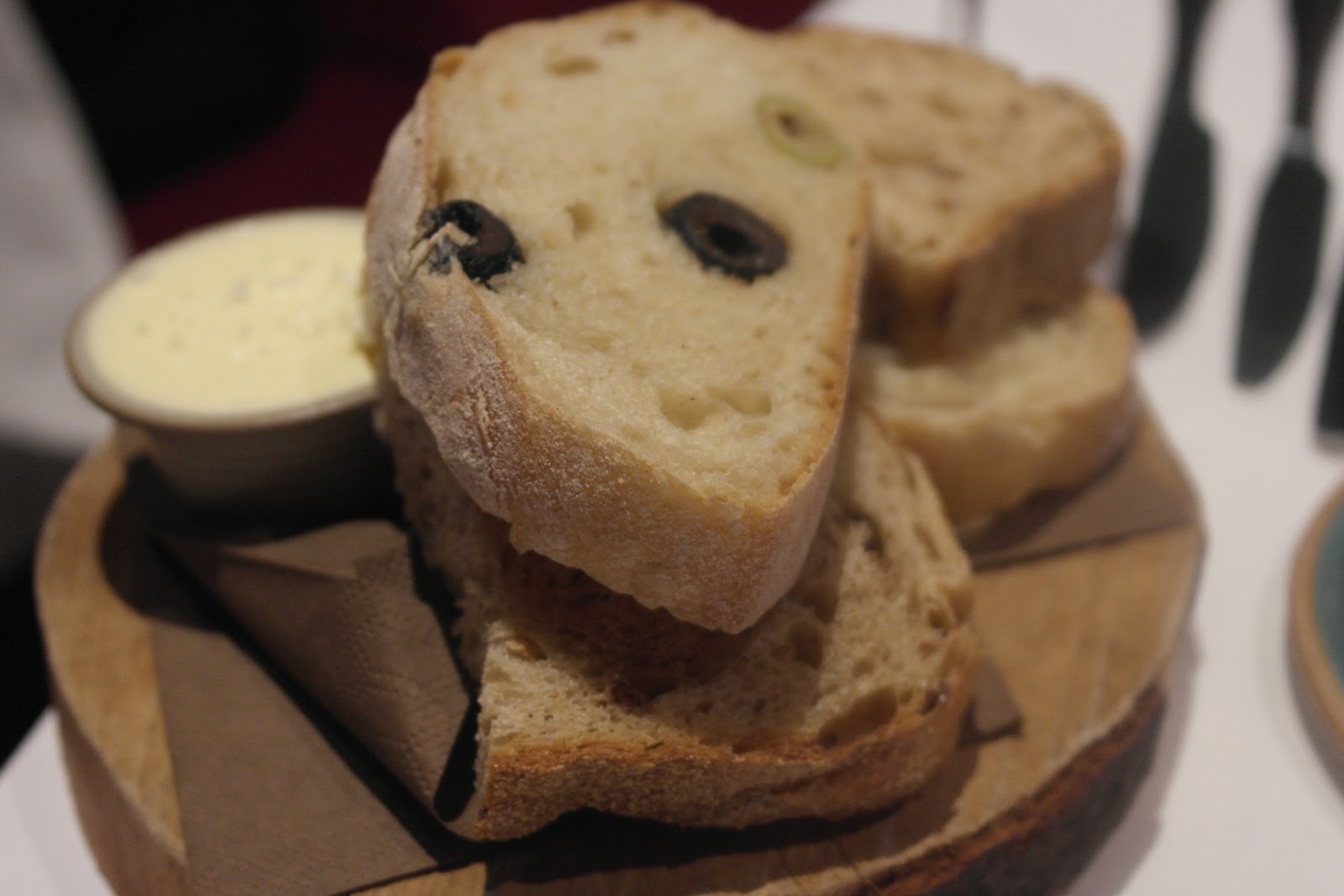 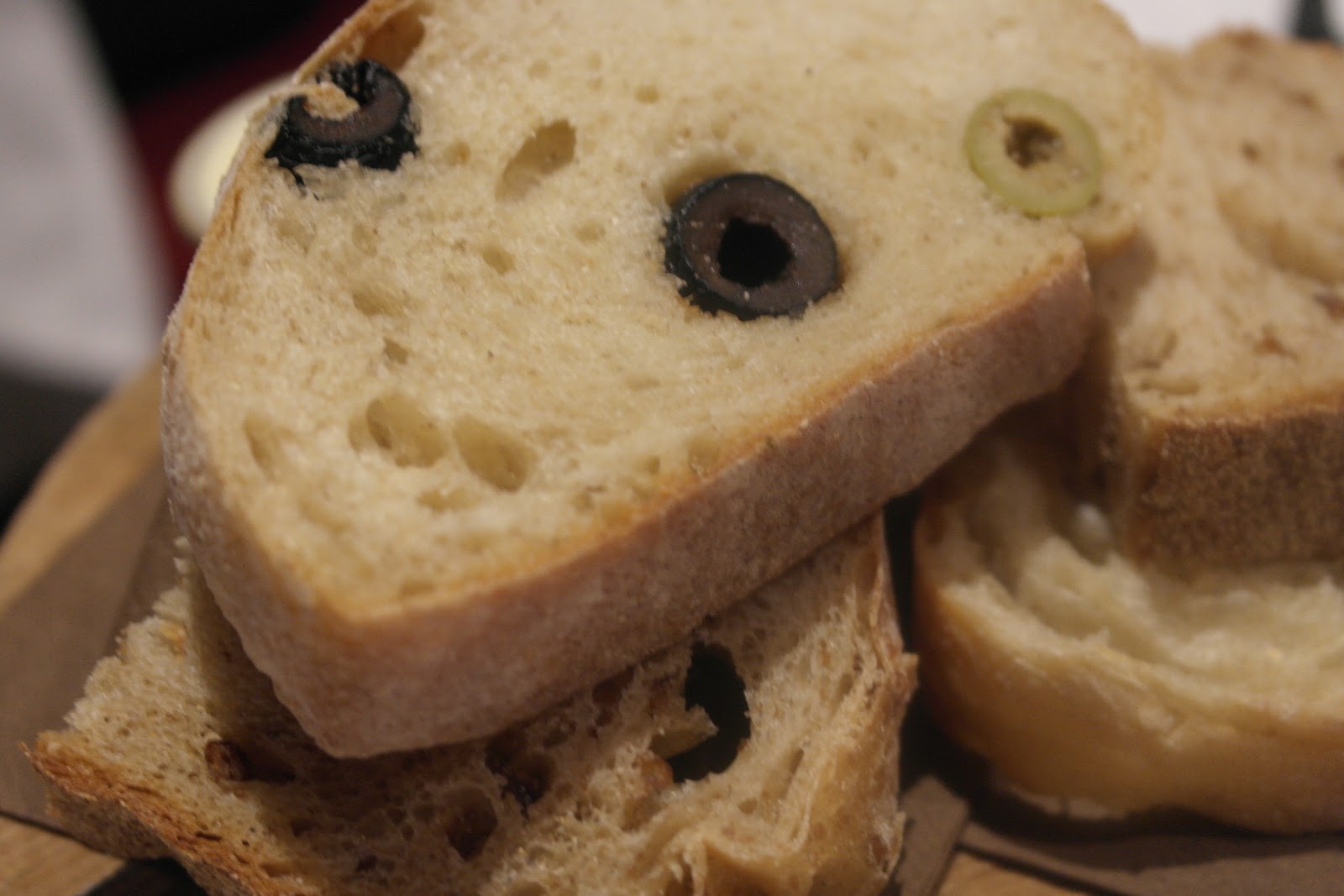 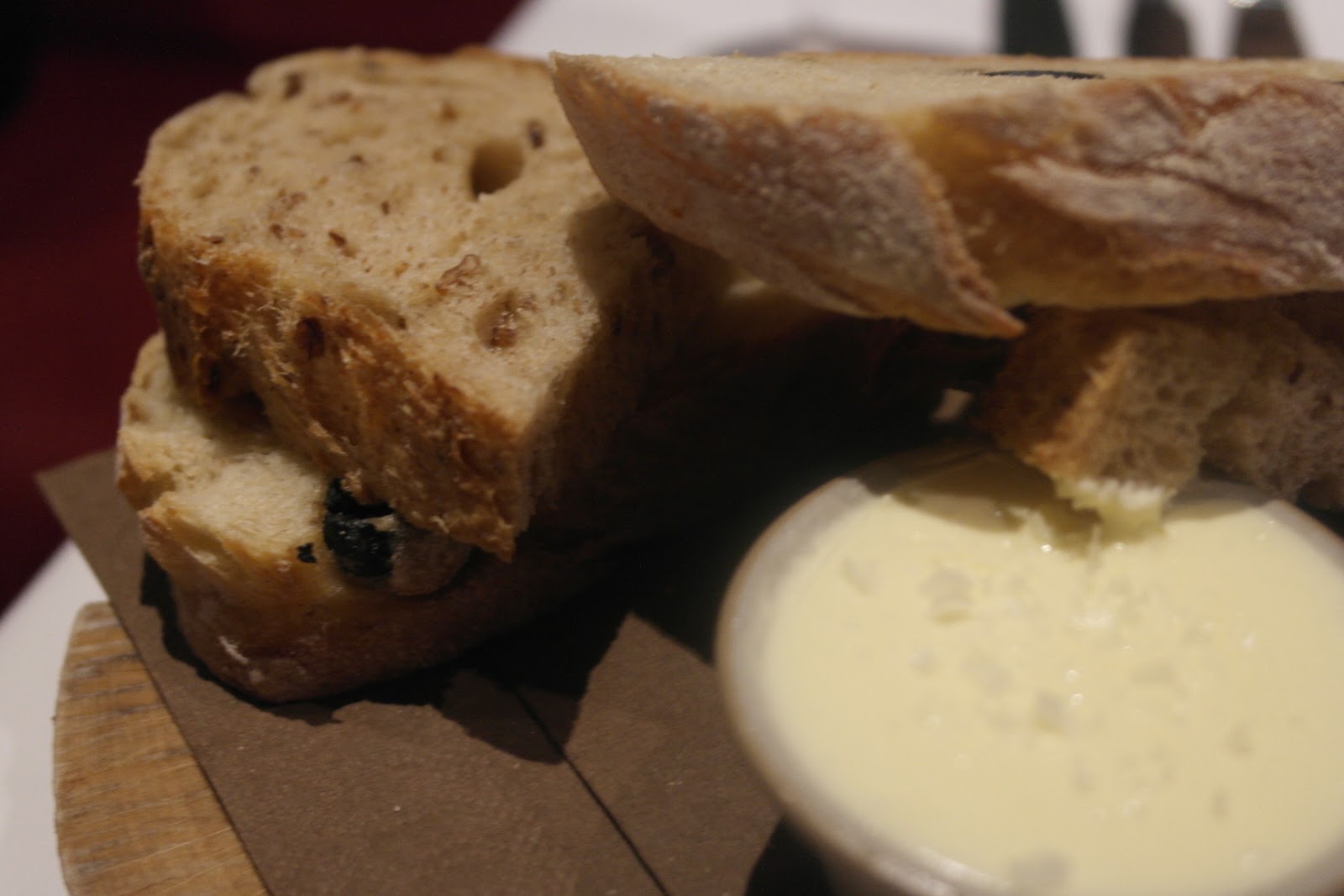 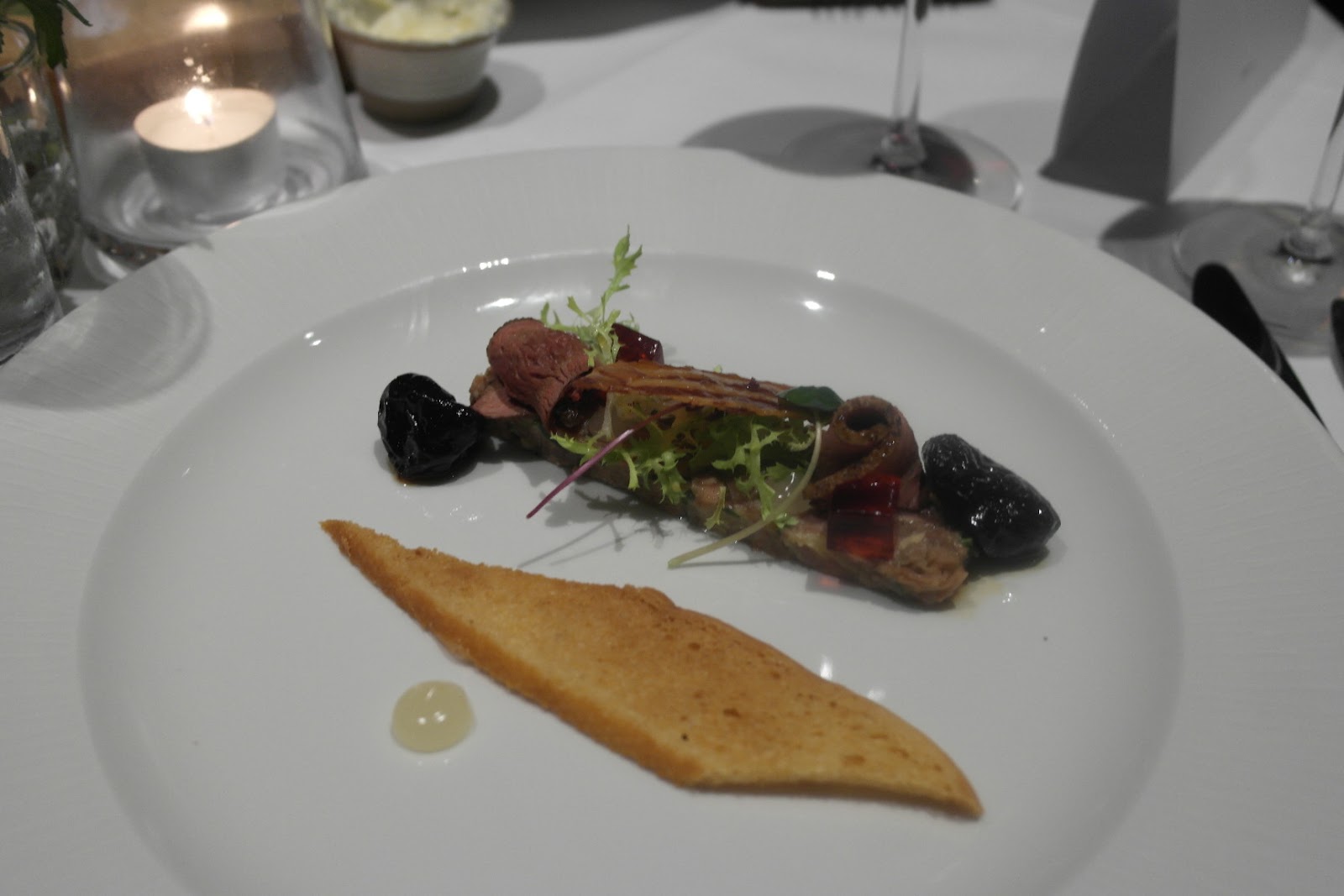 The Mallard confit was delicious, both in texture and taste and the boozy prunes combined very well with the richness of the duck. The dish also came served with pieces of whole duck breast which melted in the mouth. It was paired with Rioja Alavesa of Spain, a fruity red wine that worked well with the flavours of the duck. 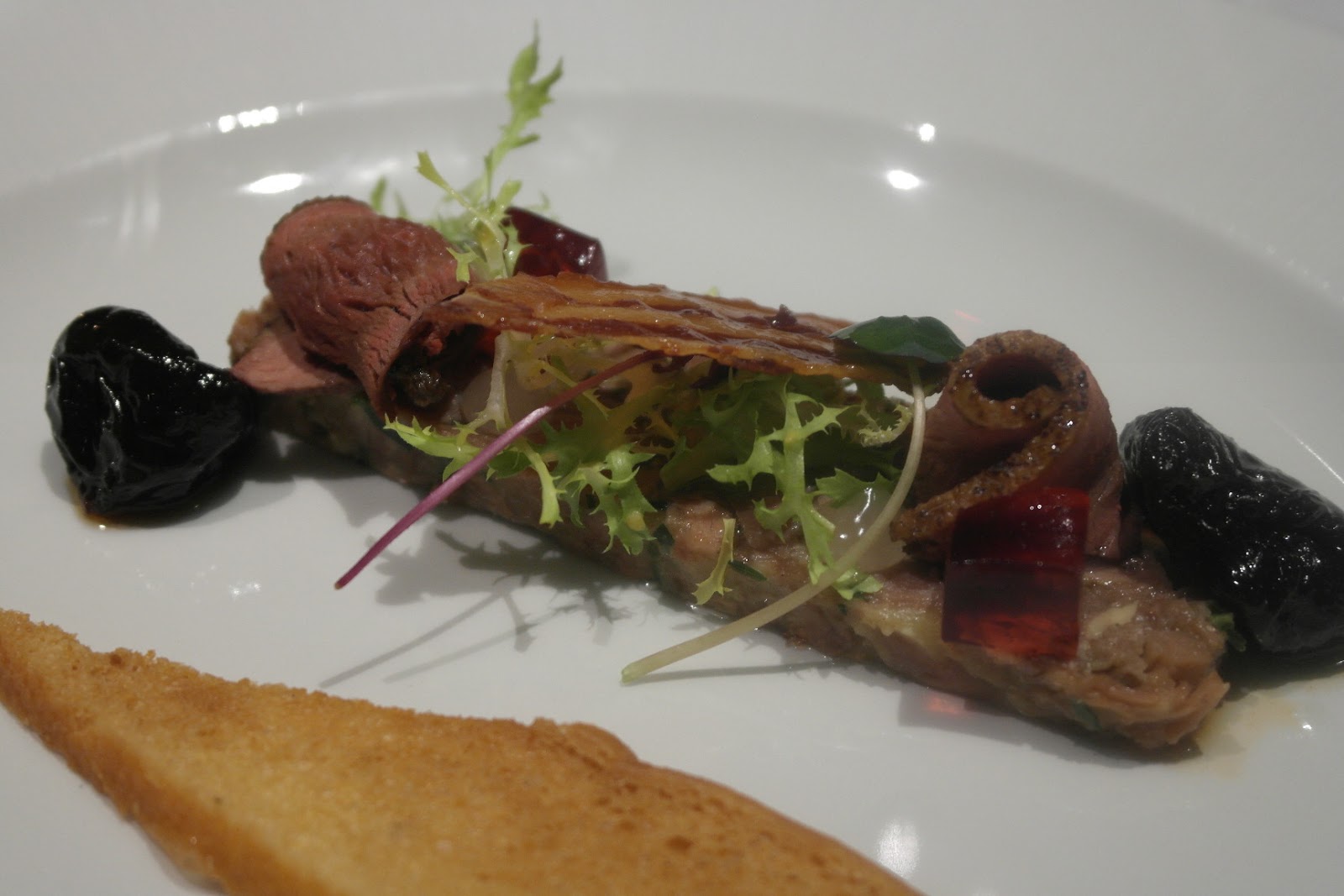 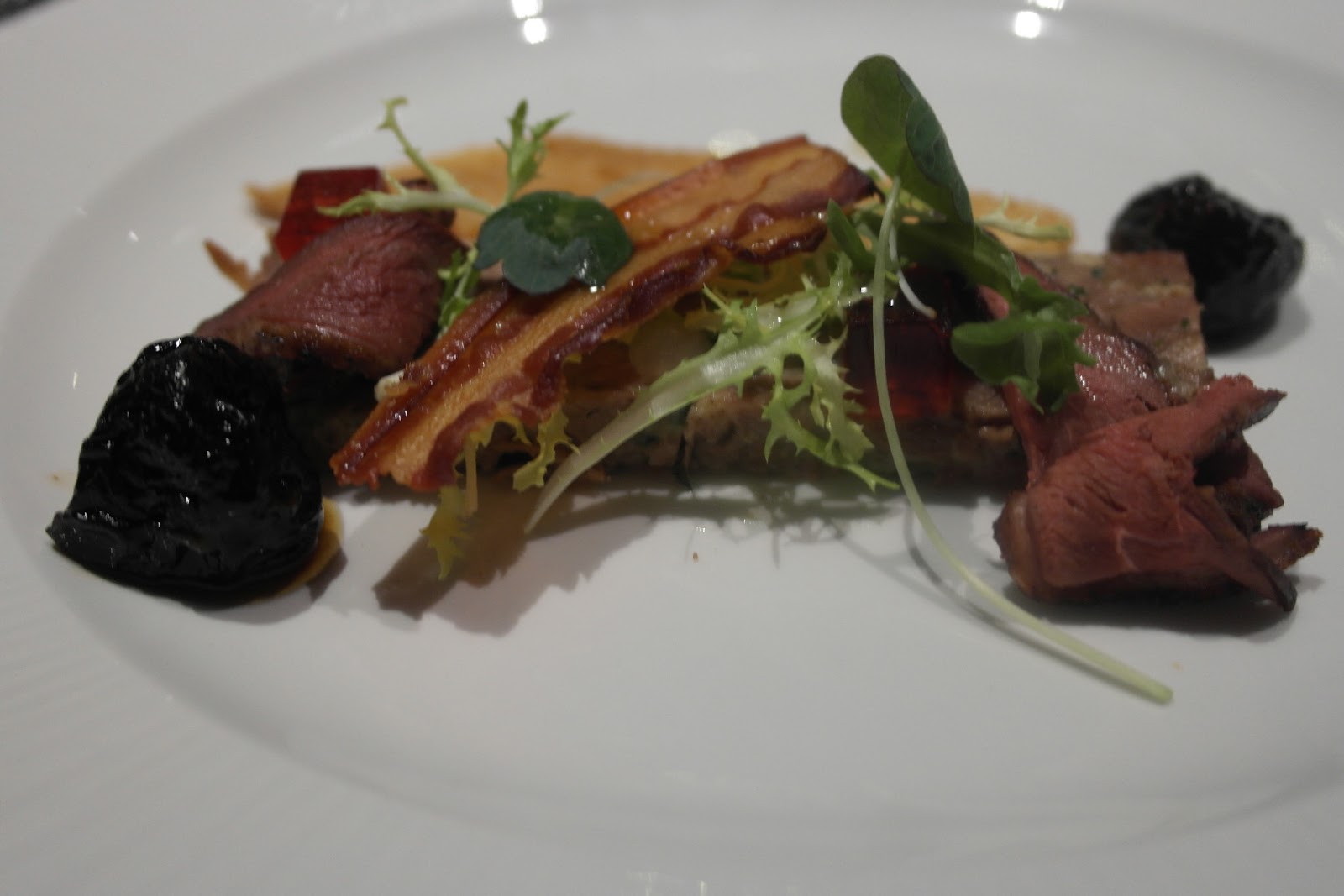 Next up was Black Truffle Risotto with Rievaulx Shot Red legged Partridge with braised chestnuts, Wilted curly kale and Moorland ‘Tomme’. Again the dish was presented well and smelt divine. 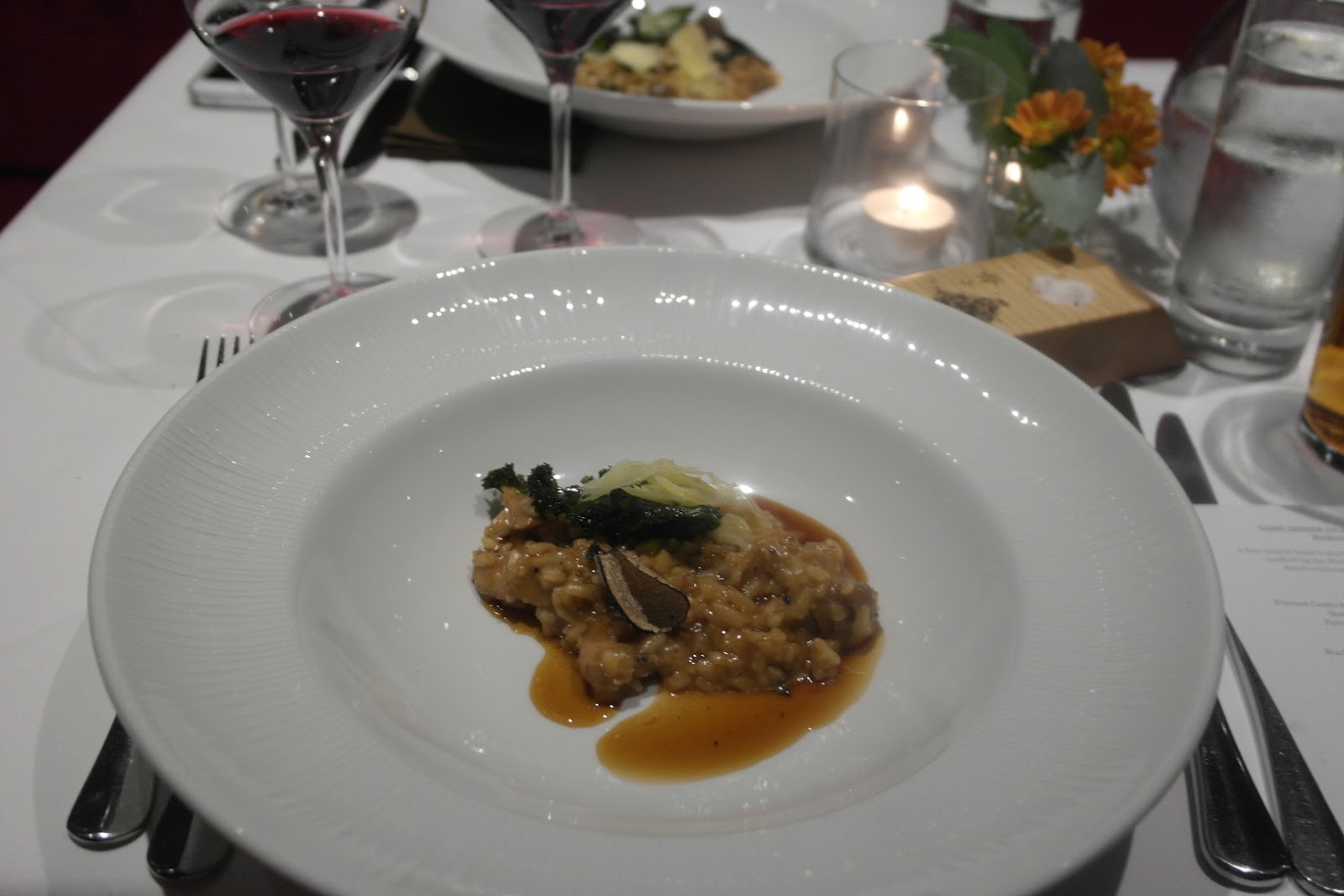 The flavours and texture in this dish were outstanding, the strong flavour of the black truffle worked well with the gamey taste of the Red Legged Partridge. A great hearty, comforting dish. 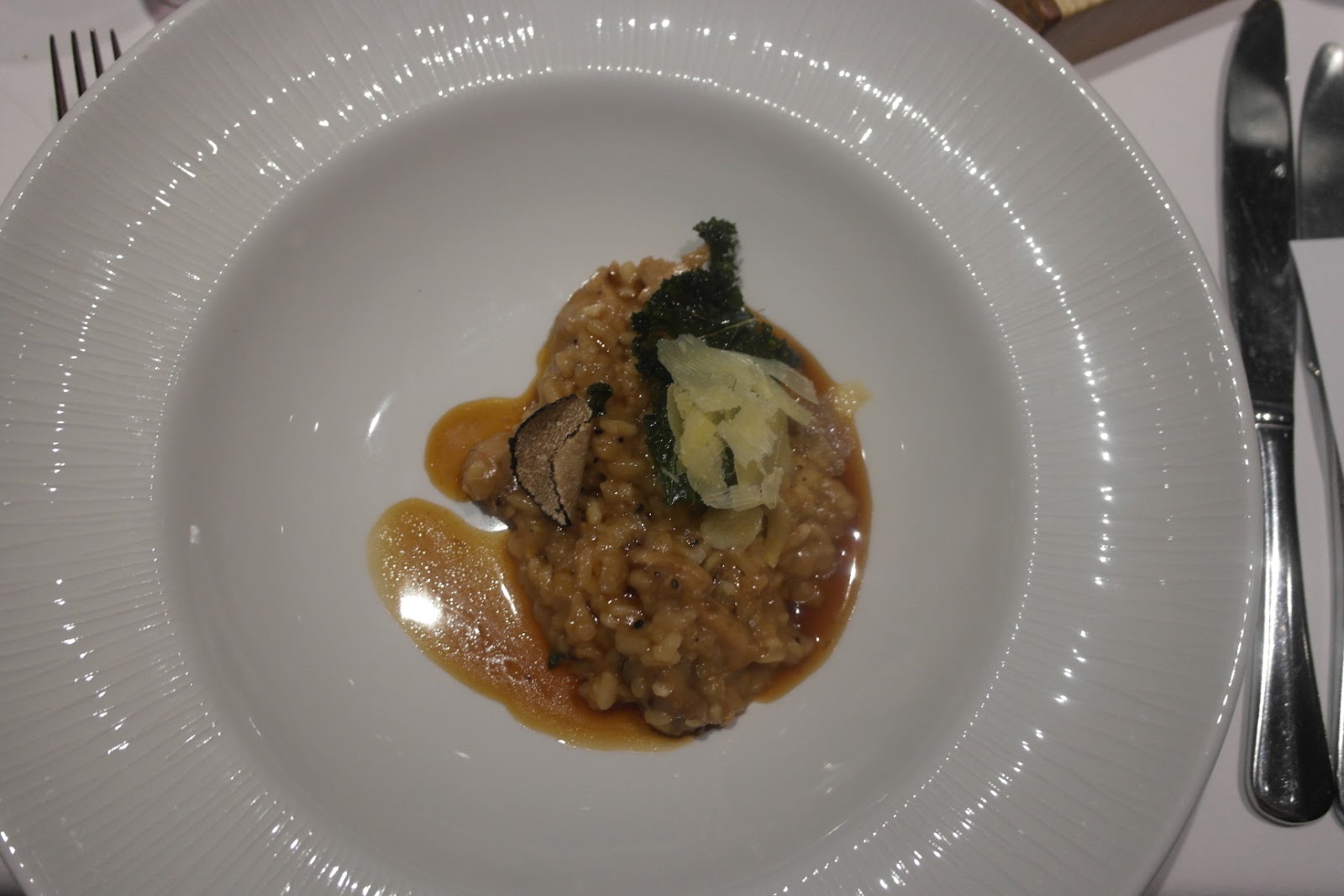 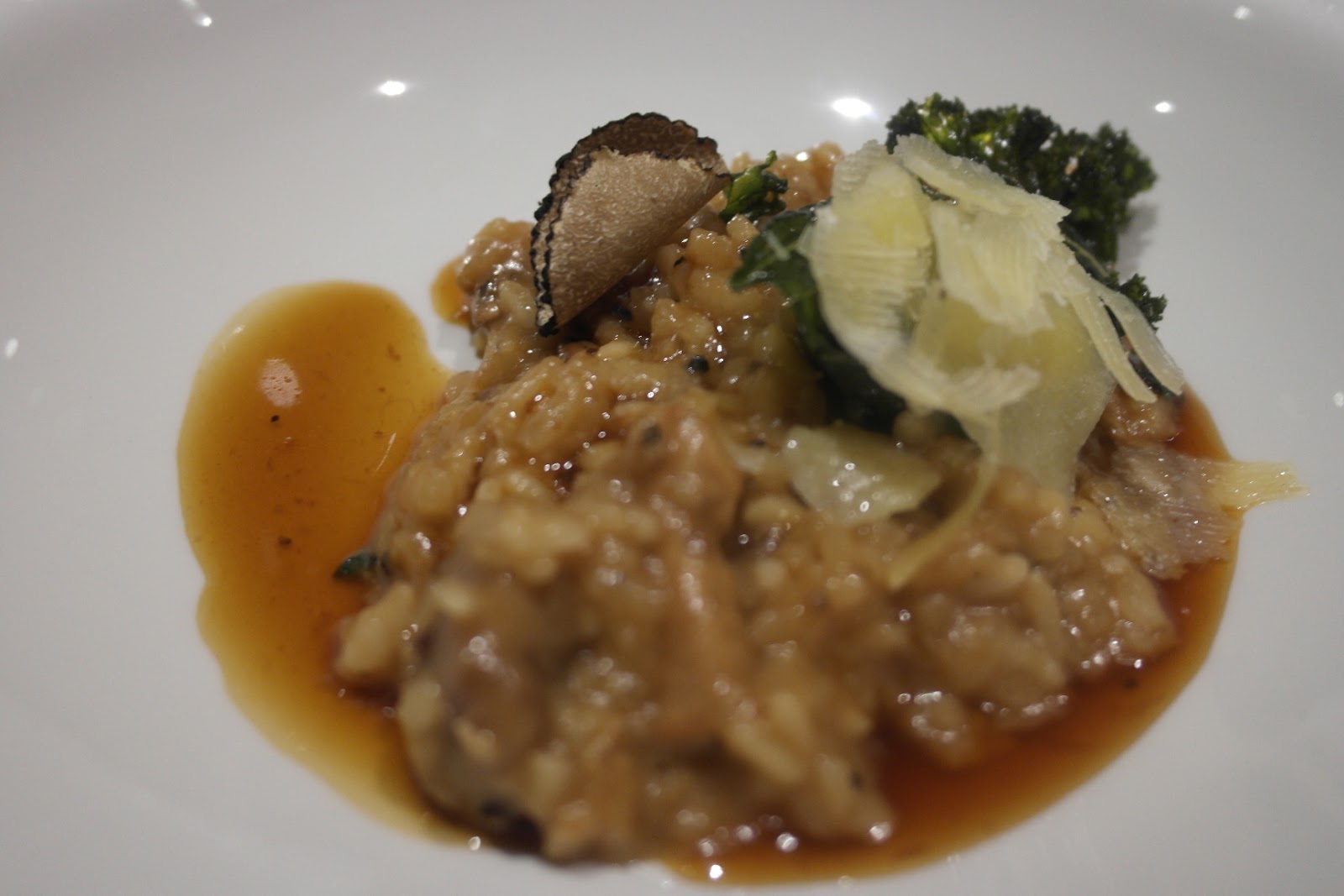 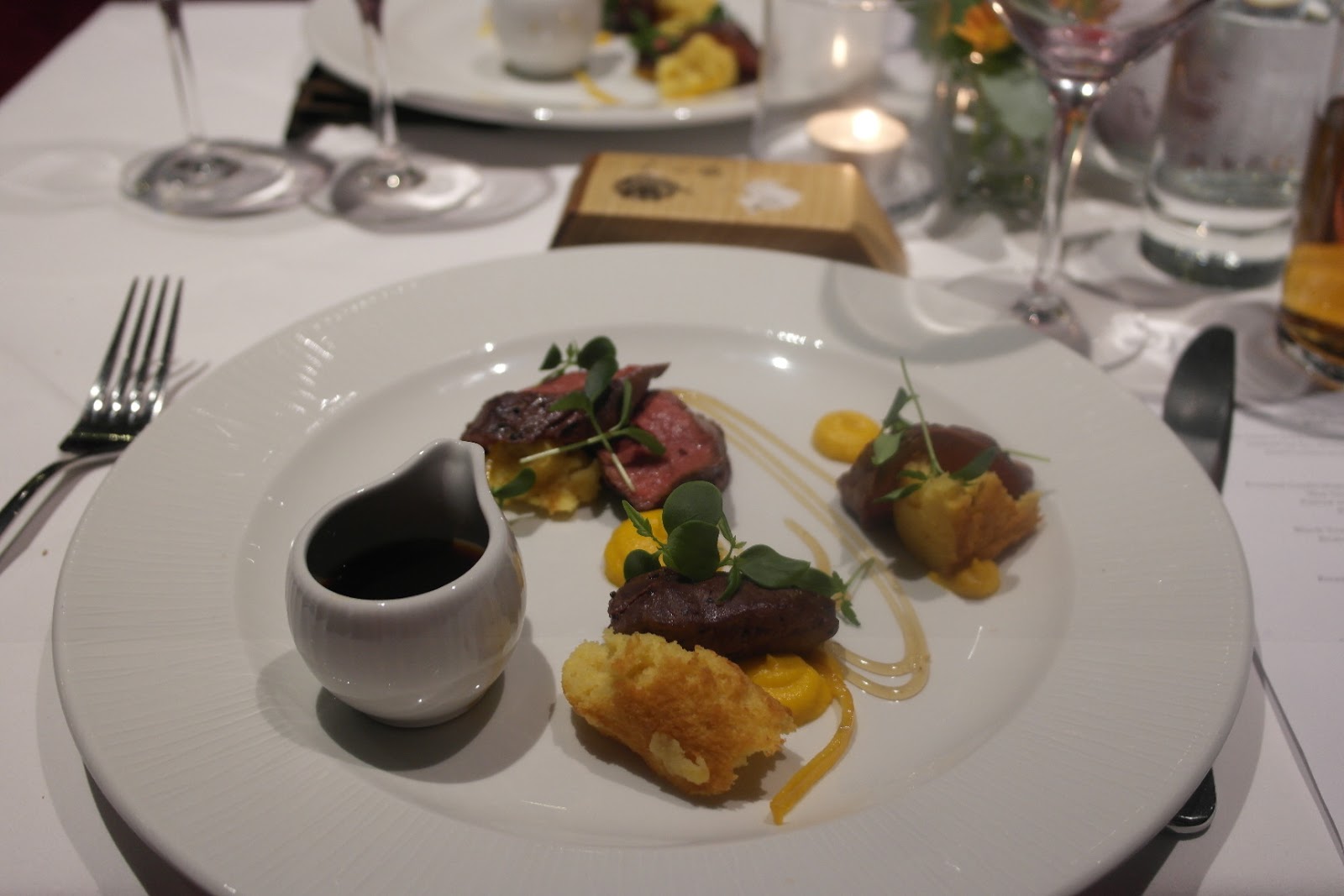 The Venison was cooked perfectly and beautifully pink and tender in the middle, which just melted in the mouth. The rich home made gravy was delicious and so full of flavour. 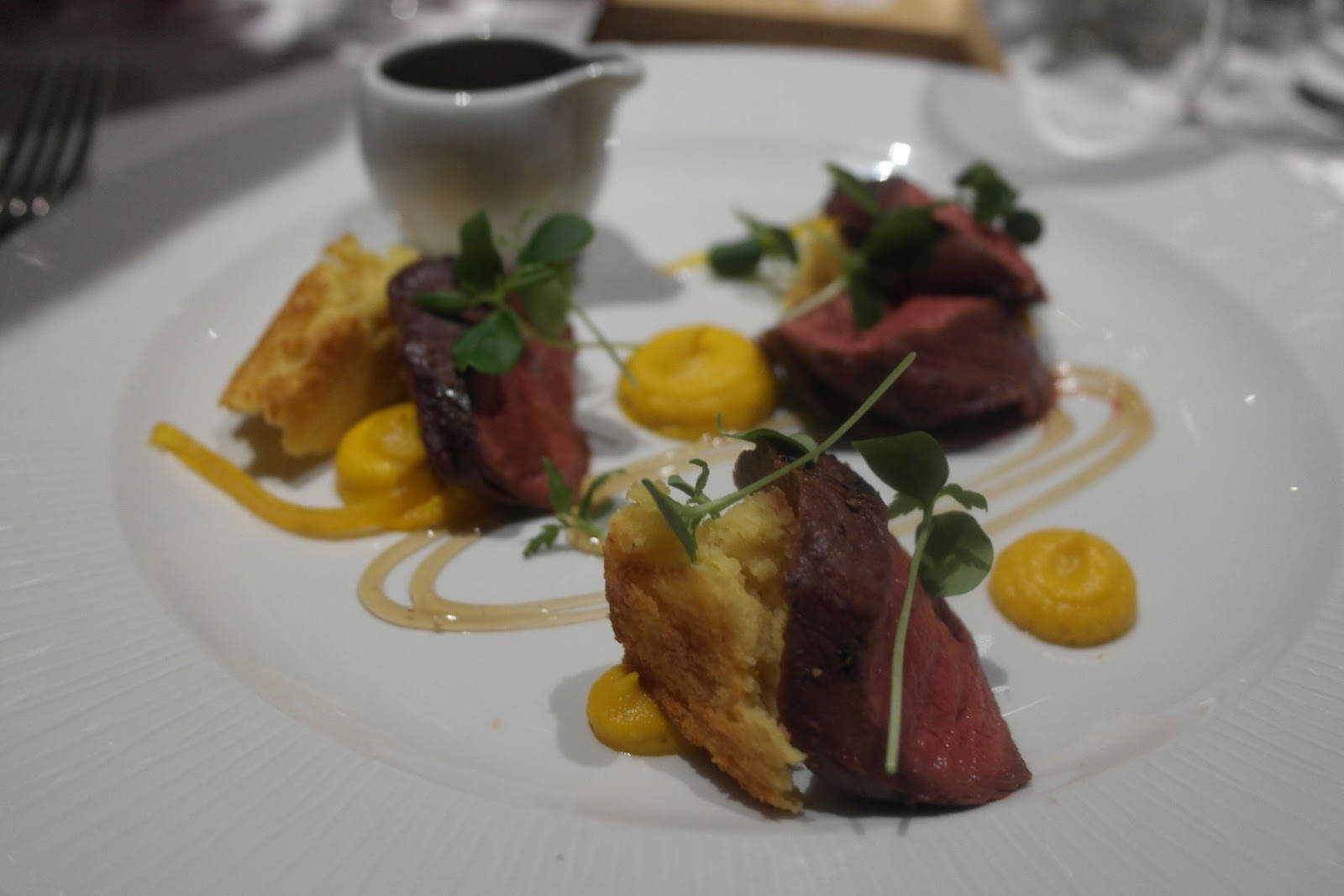 My only slight criticism is that I thought the sweet whiskey marmalade cake was a slightly odd pairing to go with the venison. For me, it didn’t quite work together and perhaps would of been better with a selection of seasonal vegetables. 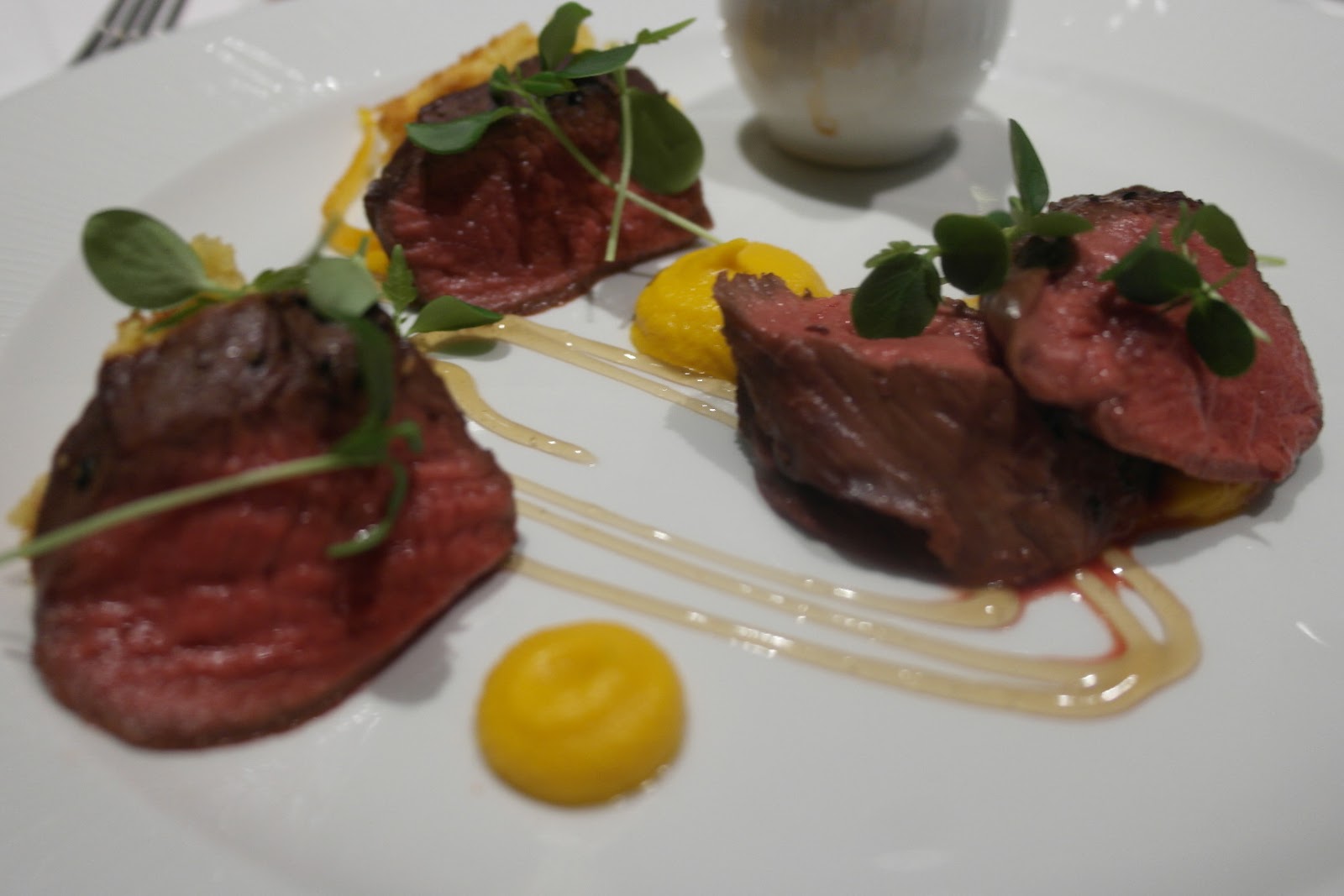 The carrott puree was rather sweet tasting, but I thought it worked well with the orange and other flavours in the dish. 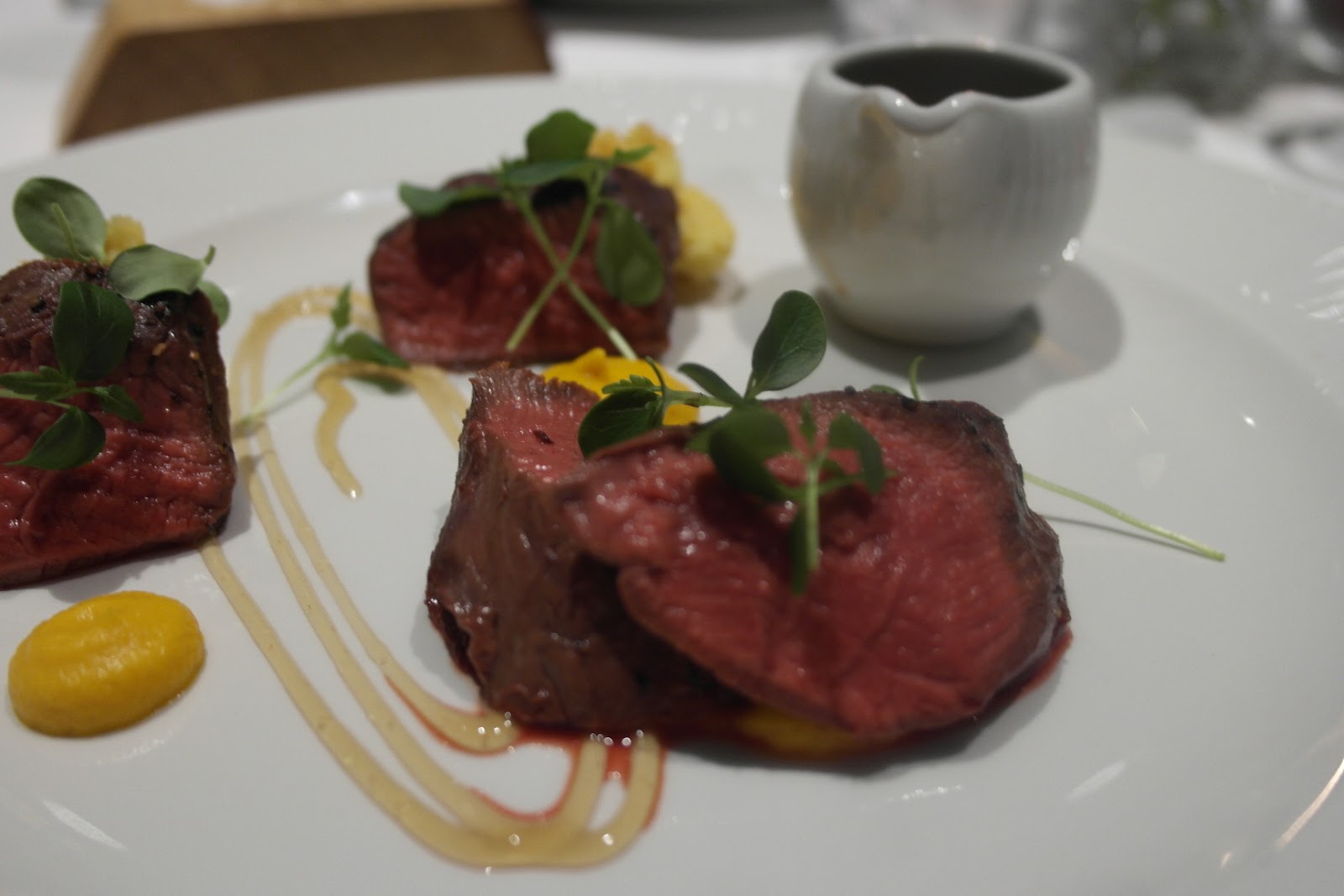 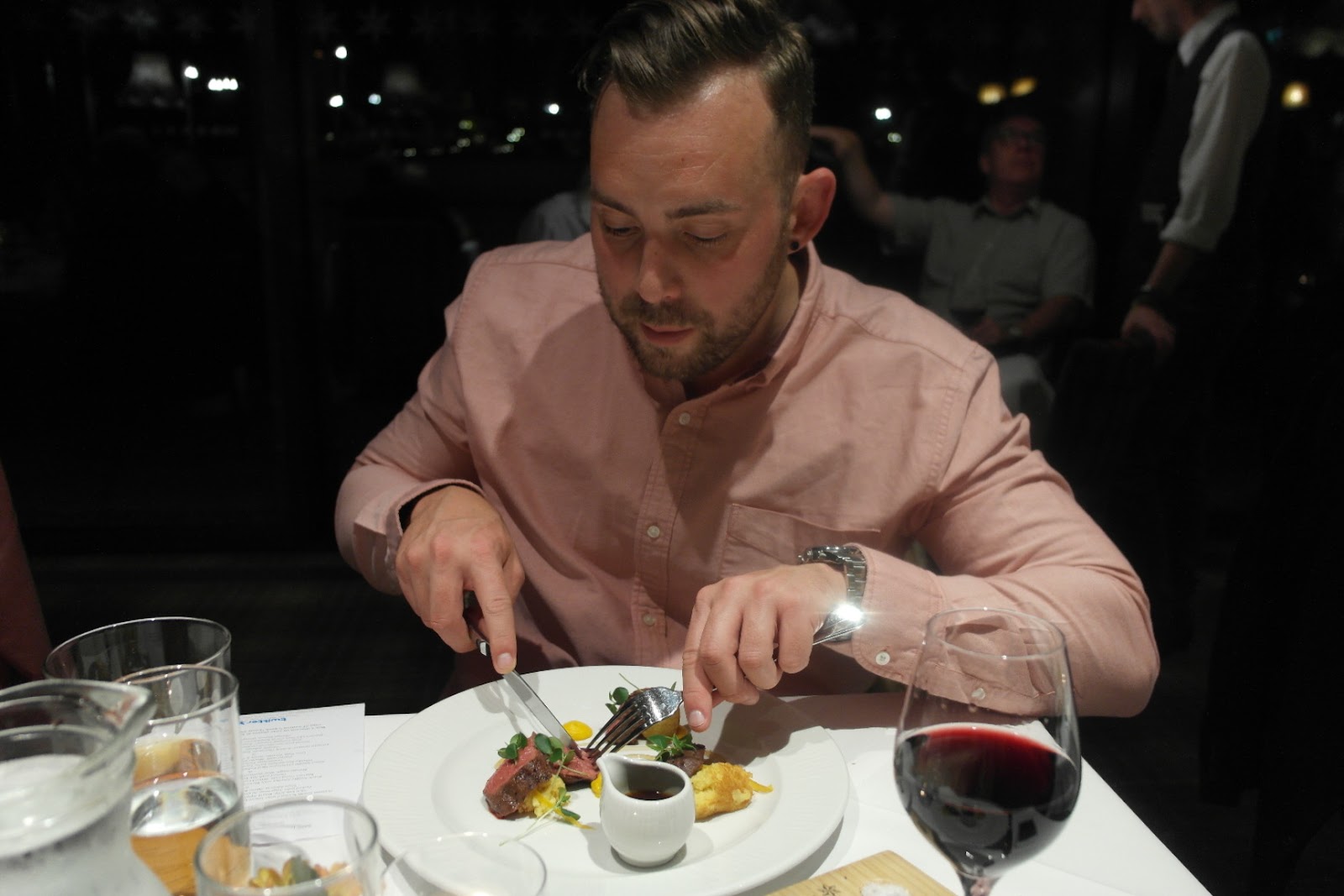 To round off the evening, we had a dessert of Famous Grouse & Dark Chocolate  Mousse with Roast Hazlenut peat served with ‘Singin Johnny’ Sorbet. 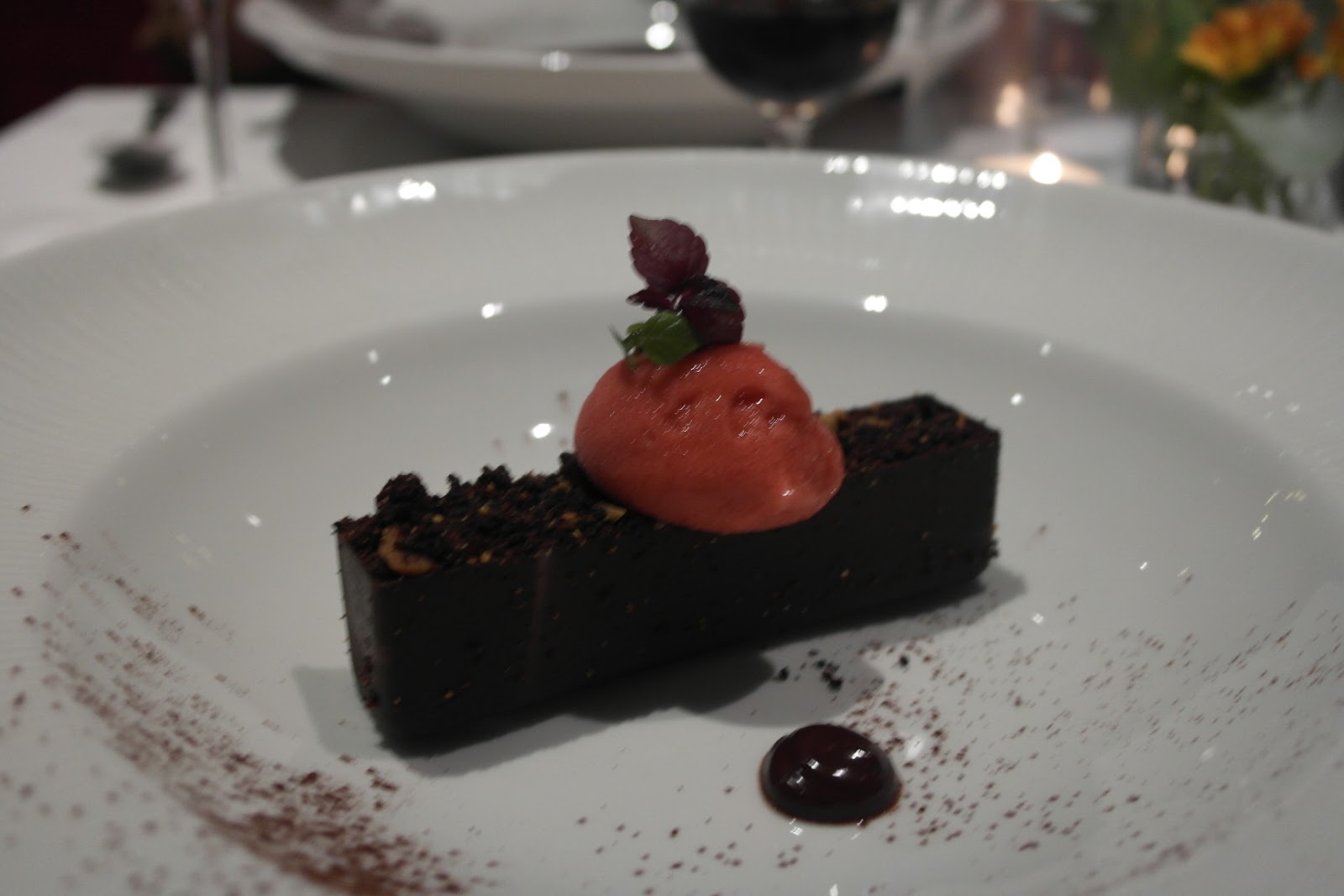 This is definitely one for the chocolate lovers like me. The outer chocolate shell was a little hard to break into, but the mousse had a very intensely chocolatey rich flavour. I very nearly struggled to eat it all, after indulging in all the previous courses. 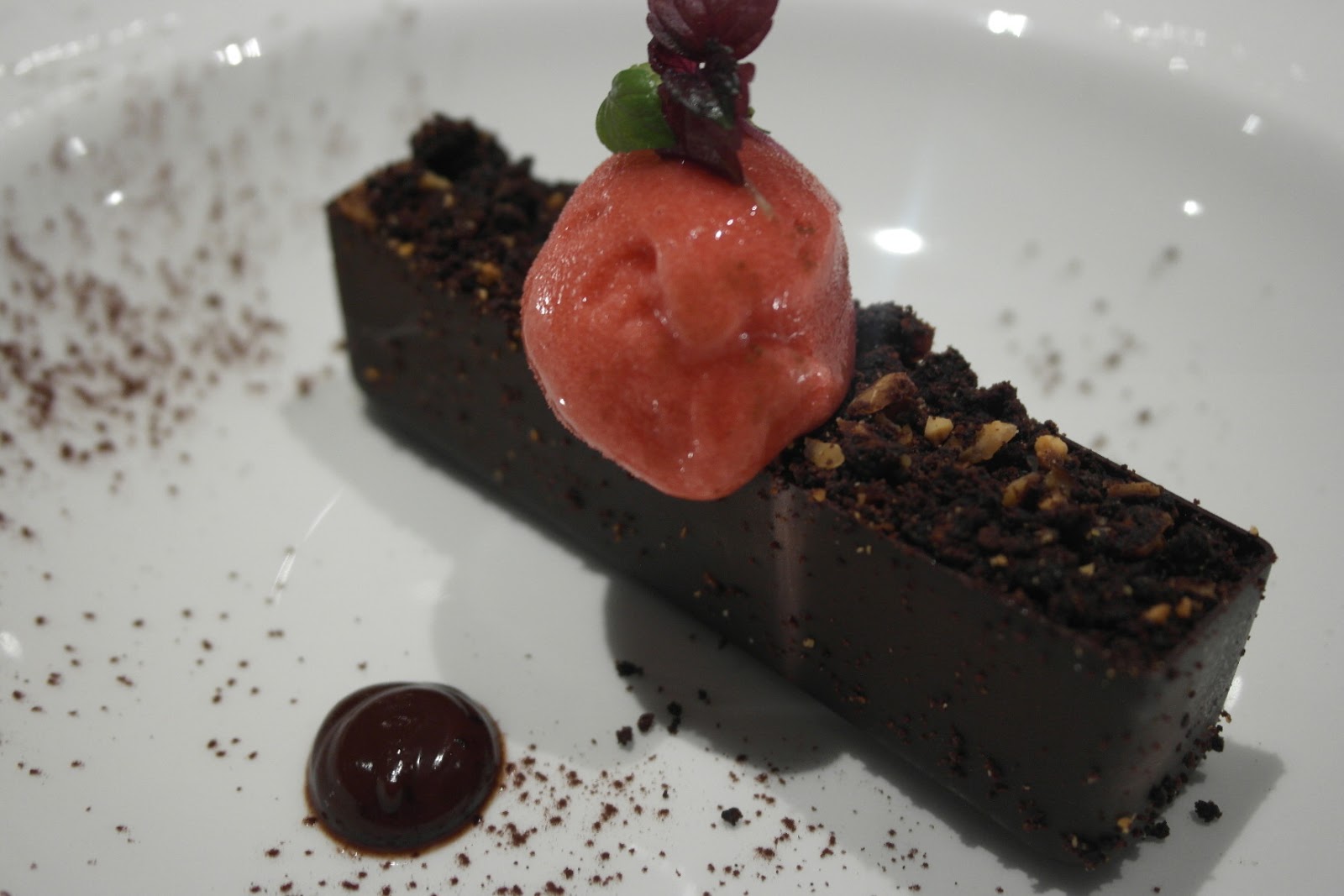 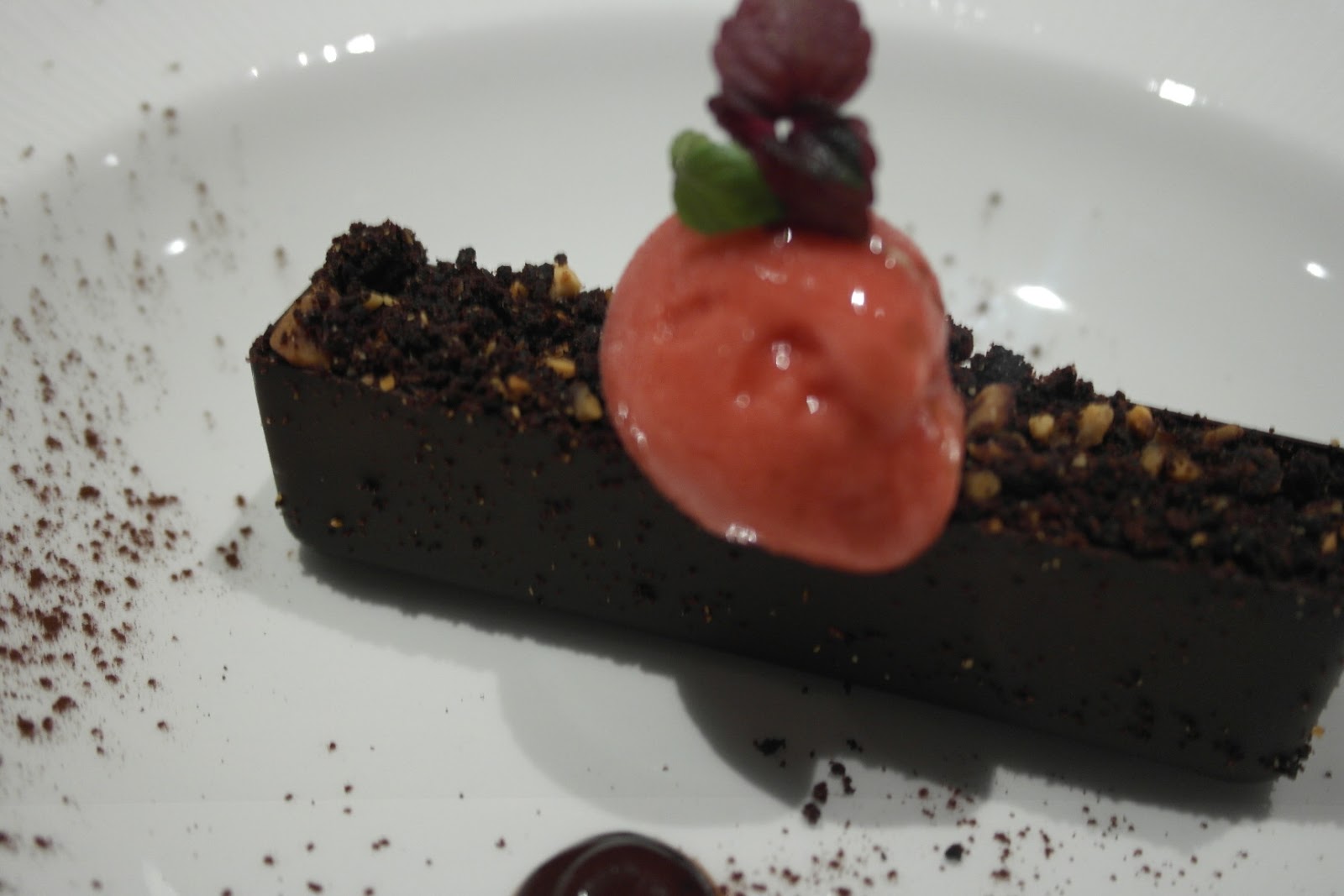 Overall, it was a really nice evening and it ticked all the boxes for me when it comes to dining. The highlight for me being the delicious tasting locally sourced venison. I thought it was brilliant value for money for the 5 courses, priced at £40 per person (excluding wine) Where else would you be able to sample Michelin Star dining for that price? Check out The Star Inn The City for more information or to make a reservation.

Have you been to The Star Inn The City? Let me know what you thought in the comments below.